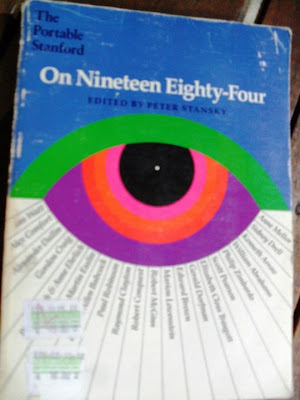 Nineteen Eighty Four is one of the political novels that has lasting impact up to this time. The novel serves as warning that totalitarianism is not good for humanity. George Orwell's potent imagination created the terms - Newspeak, Doublethink, thought police, and the omnipresent character of Big Brother. It infuses in our collective consciousness that these words have negative connotations with regards to our freedom and privacy.

On Nineteen Eighty Four edited by Peter Stansky, published by the Stanford Alumni Association (1983), is a book that tackled and analyzed the novel. It contained twenty two essays contributed by Stanford's own Alumni. These alumni are influential in their own respective field. One of the essays that caught my attention was the essay written by Philip G. Zimbardo entitled Mind Control: Political Fiction and Psychological Reality. His premise is that the manipulation of authority over every individual's thought, feelings and actions has alarming effects on human race. He compared the MK-ULTRA program conducted by the CIA during the 1960s up to 1970s to Orwell's Room 101 (torture chamber) in the novel. And also the essay of Martin Esslin entitled Television and Telesreen --- he discussed the bad effects of mass media in manipulating public  opinion, molding of individual's behavior, and injecting fear in one's mind. He stated that "with the development of television, and the technical advance which made it possible to receive and transmit simultaneously on the same instrument, private life came to an end". He juxtaposed the concept of telescreen in the novel and the advent of television in our lives.

Their criticisms served a reminder that Orwell's "prophesy" can possibly happen. With the development of technology, our privacy becomes an issue. Hi-tech surveillance gadgets become so rampant that we forget to analyze their effects on us. The manipulation of media, freedom of speech and information are also alarming issues that we need to pay attention. We hope that Orwell's prophesy will remain a fiction.

Leave a comment below and let me know what you think.
Thanks.
Labels: book review Books