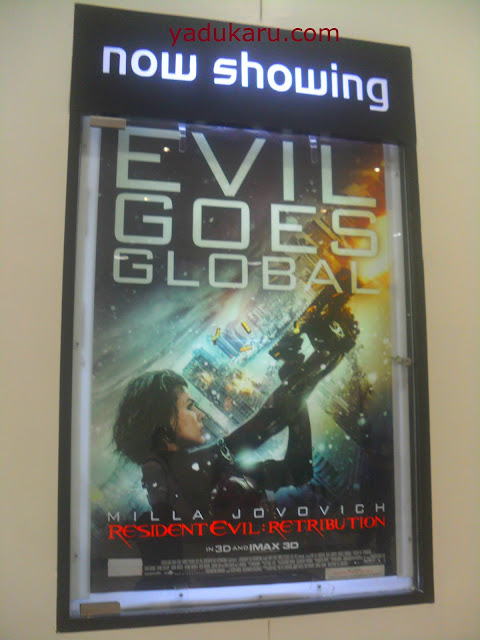 The much awaited sequel of Resident Evil has finally arrived. Starred by Milla Jovovich as Alice, this film never disappoints me. In every sequel, there is a different approach, new stunts and upgraded villains. It keeps getting better and better.

The 5th installment has new villain, she is no other than the Red Queen--- an artificial intelligent girl who controls the Umbrella facility. She was first seen in the Resident Evil 1. The film sets in Russia, where an underwater facility of Umbrella Corporation is found. This facility is the testing ground of Umbrella Corp. for their biological weapons such as the T-virus. It is a high-tech facility where they "created" another world sets in underwater. They used  simulated places of Moscow, Berlin, New York, Suburbia and Japan to test the virus.

In this film, Paul W. S. Anderson, the director, put some elements that can be found in the previous installments. It's like your're going back to the previous Resident Evil films. It implies that Alice has survived the horror brought by Umbrella Corp. She must end their foolishness and restore the peace in the world. Alice becomes a heroine, the only hope of humanity to fight the aggressive zombies and the genetically modified monsters created by Umbrella.

The fight scenes in resident Evil 5 is truly amazing. Expect new stunts and choreography to witness. The fight scene of Jill Valentine (Sienna Guillory), the former police of Racoon City in Resident Evil: Apocalypse and Alice is epic. Her character transforms into not so good fighter to slicker and more daring ass-kicker. On the other hand, Rain Ocampo's (Michelle Rodriguez) "manly" fighting approach is awesome. She portrays two opposite  roles --- the "good Rain", in which she projects a feminine and sweet woman; and the "bad Rain", in which she projects a masculine, very tough and dangerous woman.

It is good to see that Wesker (Shawn Roberts), the primary antagonist in Resident Evil: Afterlife, make "friends" with Alice. He brings back the "power" of Alice by injecting the T-virus, in which Alice is immune to it. He collaborates with Alice to fight back the impatient Red Queen. The Red Queen wants to wipe out the human race and only Alice and her team could stop her.

I am looking forward for the Resident Evil 6. I know it will be spectacular because as Anderson explains  that the sixth film will most likely be the finale of the series. Better see the movie and experience the world of Alice. As she said," My name is Alice, and this is my world."

Leave a comment below and let me know what you think.
Thanks.
Labels: action film film film reviews Hollywood Resident Evil sci-fi zombies