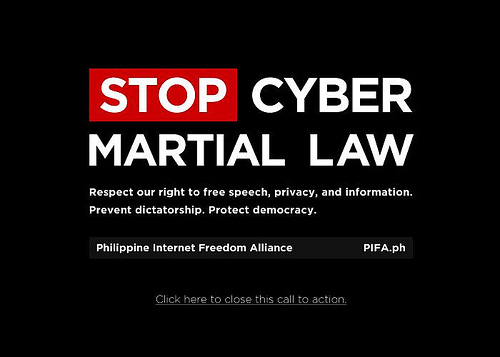 "People demand freedom of speech as a compensation for the freedom of thought which they seldom use."
-Soren Kierkeguard


The implementation of Republic Act 10175 or the Cybercrime Prevention Act of 2012 is now effective. Many netizens in the Philippines (including lawmakers, bloggers, members from the academe and students) protest against this new law especially on the provisions in online libel. Section 4, 5 and 6 of R.A. 10175 are called "unconstitutional due to vagueness". It is a violation of the people's right to free speech. It also allows authorities to collect data from personal user accounts in social media and listen in on voice/video applications, such as Skype, without a warrant. All social media users will be affected, whether you share, comment, tweet or post a blog post with libelous material, you will be put to jail; with a penalty of P1 million pesos and 12 years in prison.

If you look at the brighter side of it, Cybercrime Law is good in fighting online pornography, hacking, identity theft and spamming. But the section about online libel remains vague to the majority of the online users. According to Sen. Teofisto Guingona, "without a clear definition of the crime of libel and the persons liable, virtually any person can now  be charged with a crime --- even if you just re-tweet or comment on an online update or blog post."

As a blogger, I am worried because I have to limit my write-ups about  relevant issues in our country (esp. in Mindanao). Though I am not a hard core social commentator, I cannot fully give my opinions and commentaries due to the provisions on online libel. I know my limitations and responsibilities as a  social media practitioner. But I cannot exchange my freedom (of speech) over this law because it's a violation of our constitution. I am still hopeful about this issue. I know that this law will have beneficial effects on us but it should be reviewed immediately.

you may also read

Digital Martial Law: 10 scary things about the Cybercrime Prevention Act of 2012 by SPOT.ph

Leave a comment below and let me know what you think.
Thanks.
Labels: blog Cybercrime Law internet netizens philippines pop culture