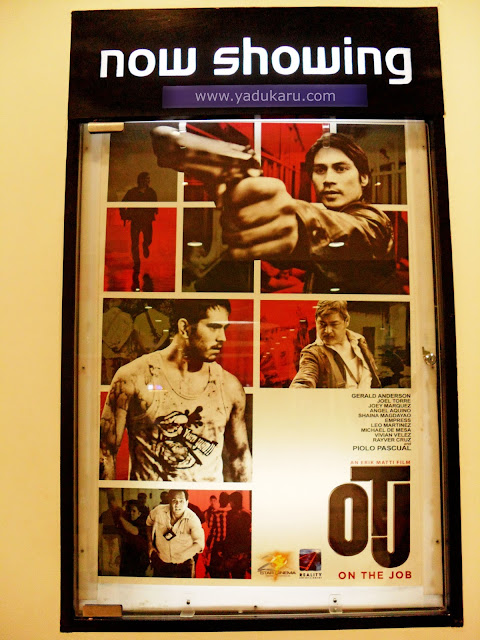 The issue of gun-for-hire in our country is not new to us. We are bombard with its inhumane activities in national and local media. Many conspiracy theories circulated that we have difficulty in identifying what’s the fact and fiction. One of the brave films that tackles this issue is the recent film of Erick Matti called On the Job (OTJ).

“The film is about the passions and ambitions of four men trying to survive, and make a living for themselves and their respective families. It depicts parallel worlds between two inmates who are hired as contract killers, and law agents investigating the crimes. As the two groups are caught in the jobs of corrupt government officials, the two groups are lead into an inevitable collision against each other having their loved ones as collateral damage.”(1)

This Filipino action thriller film was screened and had a world premiere in the Director’s Fortnight at the 2013 Cannes Film Festival in Cannes, France. It will be released in North America in the fall of 2013. The film is reported to have a U.S. adaptation and will be directed by Baltasar Kormaker (Contraband; 2Guns). In the Philippines, OTJ is produced by Star Cinema (as part of their 20th anniversary) and Reality Entertainment.

According to the blog of Direk Matti, the idea behind OTJ came from a service driver ten years ago who told him that he worked before as a hitman when he was in prison. Erick got intrigued about the driver’s story. He researched the story to find out the truth. And his research paved way in the creation of OTJ. According to him, he wanted to go beyond the shock value of this third world corruption story and challenged himself to give the story something that appeals to him on very personal level but at the same time, still having strong universal theme hoping to give fresh take on what could be just another formulaic genre action film. He also said that he keep everything about the characters. “The character story will eventually be much more engaging story than the plot itself. The characters are the story.” He also said that if he chooses to pick a color for OTJ, it would be gray. “I was attempting to tell a story where we dissect couple of individuals from a cross section of Philippine society without passing judgment no matter how dark their gray characters get. With the choices they make, it snowballs into a web of events that end up ruining their lives…well, mostly, just ruining their lives,” he added. Direk Matti also pointed out that he had four consultants (came from the military, politics and NBI) while doing this movie. But they declined to have their names listed in the film’s credit.

As I have watched this film, I felt “depressed” because of the reality that has been happening in our country. You really felt the melancholic mood and its sense of hopelessness. You wish that you know nothing and being naïve is the only way to have peace of mind.

Contract killing or gun-for-hire trade syndicate has become a virtual industry in the country. Many cases have been reported and up until now not a single case has been resolved. According to reports, individuals or groups kill for a fee that ranges from Php 5,000 up to hundreds of thousands of pesos. The major players are assets of the military, the PNP, bodyguards of politicians, former rebels, dismissed soldiers and policemen, former members of Cafgu and released prisoners (or in the case of OTJ, the unreleased prisoners).

Various Human Rights Organizations here and abroad have conducted many studies and research on this issue but the atrocities still continues. For example, Human Rights Watch did a report entitled – “You Can Die Anytime”, on Davao City’s notorious death squads in 2009. As stated:

“Although reports of targeted killings in the Philippines, particularly in Mindanao, are not new, the number of victims has seen a steady rise over many years. In Davao City, the number has risen from two in 1998 to 98 in 2003 to 124 in 2008. In 2009, 33 killings were reported in January alone. In recent years the geographical scope of such killings has expanded far beyond Davao City and other cities on the southern island of Mindanao to Cebu City, the Philippines’ second largest metropolis. An already serious problem is becoming much worse.”

These killing incidents are quite alarming because not a single case has been resolved. It seems that our Philippine National Police (PNP) is not so interested in investigating these incidents. It seems they are reactive and not proactive in solving this issue. As presented in the film, the policemen know something about it, but they keep their mouths shut. Although there are the character of Sgt. Joaquin Acosta (Joel Marquez) and Francis Coronel Jr. (Piolo Pascual), their voices are “weak” and the people behind the killings put them in the depths of oblivion. As the lines of Gen. Pacheco (Leo Martinez) said:

“Hindi Presidente at mga Senador ang nagpapatakbo sa Pilipinas, kundi kami…kaming mga militar at pulis. Kung wala kami, matagal nang walang demokrasya sa Pilipinas.”(The President and the Senators are not the one who runs the Philippines; it’s us…the military and the police. If it is not to us, there would be no democracy in the country.)

Although I get “depressed” after watching it, one thing I appreciate in this film is that it keeps you think on what would be your contribution for social change. What would be your action or contribution in changing this system? Are you going to be blind, deaf and mute? Or be brave enough to speak the truth? The solution lies on us.