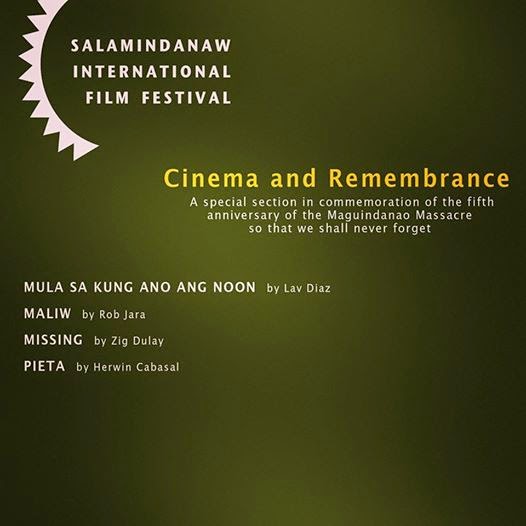 General Santos City, PH –The second edition of SalaMindanaw International Film Festival shall present a special section called Cinema and Remembrance to commemorate the fifth anniversary of the Maguindanao Massacre.

The films to be presented in this section are Lav Diaz's Mula Sa Kung Ano Ang Noon (From What is Before), set in a village during the time leading up to the declaration of Martial Law by President Marcos, Rob Jara's Maliw (Soliloquies) about three stories that feature love, idealism, and the politics of memories and melancholia, and how fragments of these are lost and found, Zig Dulay's Missing which recounts the story of Makuy who is one of the increasing numbers of victims of enforced disappearances (desaparecidos) in the country and Herwin Cabasal's Pieta about the lament and struggle of a mother whose son is one of the disappeared.

The films will be shown on November 28 at 9 in the morning at the Mindanao State University – Graduate School AVR. A forum follows the screening to discuss the role of art and media in the ongoing conversations on the issues of impunity, authoritarianism and democratic rights and principles.

“We need to confront and reflect on the democratic rights that we are enjoying right now. Rights that are constantly endangered from the ambition of powers that be. Rights that we enjoy because people have sacrificed their lives so that we may have them,” festival director Teng Mangansakan noted. SalaMindanaw is anchored on a vision that includes engaging the public in both popular and critical discourse on art, media and cinema and their transformative power to shape ideas about society.

On the morning of November 23, 2009, in the town of Ampatuan in Maguindanao province, a convoy was on its way to file a certificate of candidacy for Esmael Mangudadatu, vice mayor of Buluan town, when they were stopped at a checkpoint, kidnapped and brutally killed. Mangudadatu was challenging Datu Unsay mayor Andal Ampatuan, Jr., son of the incumbent Maguindanao governor Andal Ampatuan, Sr. and member of one of Mindanao's leading Muslim political clans, in the 2010 gubernatorial election. The people killed included Mangudadatu's wife, his two sisters, journalists, lawyers, aides, and motorists who were witnesses or were mistakenly identified as part of the convoy.

The Committee to Protect Journalists (CPJ) has called the Maguindanao massacre the single deadliest event for journalists in history. At least 34 journalists are known to have died in the massacre.

One of the chilling effects of the Massacre was the signing of Proclamation No. 1959 on December 4, 2009, by President Gloria Macapagal Arroyo which officially placed Maguindanao province under a state of Martial Law, thereby suspending the privilege of the writ of habeas corpus and other rights.

“We are in a generation that has a very flimsy idea about Martial Law, its atrocities, its effects on people. This should be be part of a continuing discussion that even young people need to be part of,” Mangansakan said.