One No, Many Yeses: Stories of Global Resistance Movement 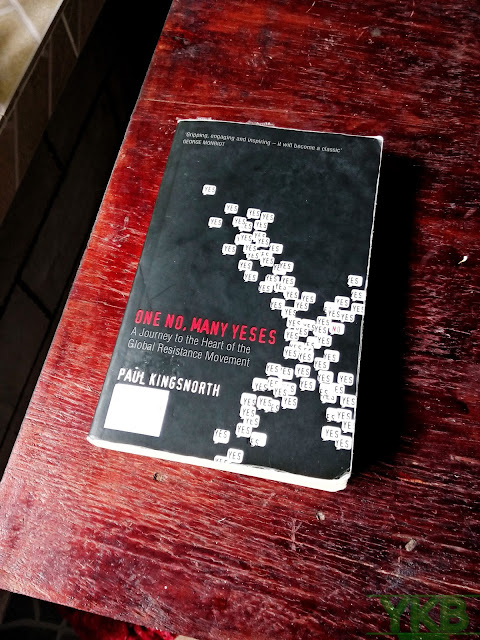 It’s rare moment when a book moved me after I read it. One of the books that I have read in 2015 that has a winning subject is Paul Kingsnorth’s ‘One No, Many Yeses’ which tells the story of different global resistance movements. It is a response to the negative effects of globalization in the communities of different countries. As what the author states, it is the “people’s right to determine the shape of their community.” It is the “opposition to the domination of the world by capital; the desire to build the world based on the principles of human rights, democracy and social justice, rather than on a process of globalization commanded by large multinational corporations; and plurality of participation.” This is no ordinary social movement. It has a ripple effect and its influence cannot be denied.

The book is divided into two parts in which the author’s experiences and ethnographic research has been shared in an engaging manner. The book introduces the story of Zapatista Army of National Liberation (EZLN). Zapatista is famous for their control of seven towns in Chiapas, Mexico, declared war on the army, the government and the North Atlantic Free Trade Agreement (NAFTA). Their story inspired many contemporary social revolutions around the globe.

Kingsnorth also shares his experience during the Genoa Summit in 2001. He also tells the story of the campaign called “Operation Khanyisa”, a campaign of resistance to the steadily rising cost of basic utilities (water, gas, electricity, and rent) in Soweto, South Africa. He also shares his encounter with Reverend Billy, the founder and spiritual leader of Church of stop shopping. Reverend Billy’s mission is to “save New York, to save America, to save the world from the scourge of consumerism”. He also tells the infamous ethnic cleansing of Papuans in West Papua, Indonesia. The rich natural resources of the area is the primarily cause of their horrible condition. His experience during the World Social Forum in Porto Alegre, Brazil is also worth reading because this event gathers different great minds with the same purpose of uplifting the condition of humanity. The brave stories of landless families and the heroic deeds of The Landless Rural Workers’ Movement (Movimento des Trabalhadores Rurais Sem Terra, MST) in Northeastern state of Maranhao, Brazil can be a source of inspiration to many. It is also amazing to read the different stories of social movements in the communities of America. Their unity and patriotism help them transform their communities. At the end part of the book, he gives the concept about this new movement.

Among the stories that Paul Kingnorth tells in his book, the story Papuans left an indelible mark in my memory. I almost cried when I read their story. From European colonialism, Indonesian occupation up to corporate imperialism, West Papua experience different harsh types of invasion and exploitation in their sacred land. Indonesian government committed human rights violations to Papuans just to give way for giant American and British-owned Freeport mine, the largest gold mine in the world. With its unimaginable resources, you would expect its negative effects not only to the environment but also to their culture. It’s like “slow-motion genocide” for the Papuans.

The stories mention in the book has similar cases in the Philippines. For example, we know stories of multinational companies committed Labor Rights violations to their employees. We are also aware of the massacres of the Indigenous People in their ancestral domain because of mining operation. These are just some of the cases that have been in our consciousness recently. We become aware of these issues because they took the right actions to stop it and defend their rights as human beings. Some succeed while others still continue to fight their cause.

The stories that he shares are all source of inspiration. These stories are so gripping that you can imagine yourself being in their situation. You would feel different emotions as you visualize their hapless condition and how they manage to surpass all of the challenges that they have encountered. This new kind of anti-globalization movement is not against to any kinds of progress. Rather it is a movement which stands for redistribution. As Kingsnorth describes:

“This is a movement which stands for redistribution – redistribution of both wealth and power. It stands for equity – a world in which everyone gets their share, of material wealth, of representation, of influence. It stands for autonomy, and for genuine democracy, both participatory and representative. It stands for a model of organizing which rejects, in many though not all cases, traditional hierarchies, and similarly rejects the old left-wing model of leader and followers, vanguard and masses. It stands for DIY politics – a willingness and desire to take action yourself, to take to the streets, to act rather than to ask. It stands for economic independence, anti-consumerism and a redefinition of the very concepts of ‘growth’ and ‘development’.

As I read the book, I get more inspired on issues that I cared. I appreciate more the advocacies that I supported. Through reading this book you would be brave to stand up and speak out about relevant issues in contemporary time. It is like a wakeup call that aids you to become an active and concern citizen of the world. Reading this book is just a start and the rest is all up to you.