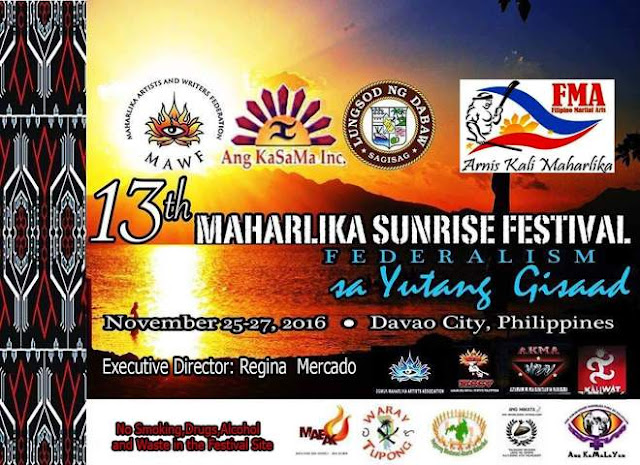 Contrary to Time Magazine’s report that night is descending over the Philippines due to alleged extrajudicial killings, the nationwide federation of artist and writers perceive the sun rising as symbol of hope and courage dawning in the country, particularly in Mindanaw.

The 13th Sunrise Festival will be held in Davao City, for the first time, in November 25-27, 2016. This will be a continuation of the yearly held festivities that were being handled by the Maharlika Artists and Writers Federation (MAWF) in different key cities in the country since 2003.

Deo Palma, the MAWF national coordinator, said as this develops, the federation is now sighting for the Municipality of Malungon to take part in the event, by featuring a tribal dance during the opening ritual of the tribe-fashioned musical presentation at the Felcris Centrale in Quimpo Boulevard, Davao City.

Among the string of performers are as follows: Ang Kawangis ng Tribu of Palawan, Asin composer Ysagani Ibarra, Kuntaw, MAE-EK, Madayaw Cultural Ensemble, Davao Fire Arts Community, and other homegrown talents from Luzon and the Visayas.

These are dedicated artists who aim to shun the individualistic adage - Art for Art’s Sake. Rather, in recognition of the social responsibility that comes along with their gifts, uphold the selfless principle of - “Art for Service and Blessedness!

Davao’s pride, sculptor KUBLAI MILLAN, will be the guest speaker during the visual art exhibits that includes multi-awardee Florence Cinco of Samar, photojournalists Haresh Tanodra, Guijo Hubo, along with other visual artists, both homegrown and from other areas.

Aside from cultural shows, a symposium on Federalism and empowerment through the formation of well-informed views so that if or when consultations and a referendum will be conducted, opinions and ambitions of various sectors would be counted in and considered in the case of legislation.

“Economic reforms for social justice, upholding of indigenous and Moro People’s rights, efficient environment protection, and equitable natural resource use is merely among the few of the advantages if ever that Mindanaw shifts to a Federal form of government,” says Palma.

Workshops on Art and Ecology and Arts as Therapy, Vegetarianism, Yoga and Meditation, Filipino Martial Arts, Arnis, Acupuncture, and Homeopathy are lined up for the public.

Being a non-profit festival, all Sunrise workshops and activities including the cultural performances are FREE, as they are based on the Maharlikan core value of Bayanihan, or voluntarism.

Event organizers are searching for a good-looking, jovial, female emcee willing to co-host with actor Raymond Bagatsing for the cultural night. Final details will be made public in succeeding press releases, posters, and through the social media.

MAWF is comprised of nine regional organizations all over the Philippines. It conducted previous Sunrise Festivals in Baguio, Boracay Island, Laoag, Iloilo, Cebu, Dumaguete, Bacolod, and Clark, Pampanga, among other places. (Phillip Somozo/ with reports from MALUNGON INFORMATION OFFICE - ippalma)

Leave a comment below and let me know what you think.
Thank you
Labels: advocacy event Mindanao National Sunrise Festival news People Sarangani