The Film line up for SalaMindanaw Asian Film Festival 2016 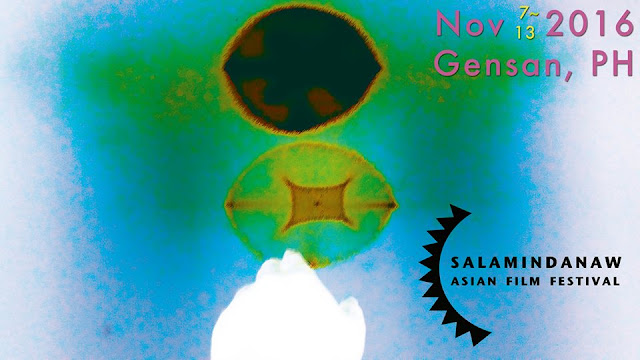 These are the films that will compete in the SalaMindanaw Asian Film Festival (formerly SalaMindanaw International Film Festival) this coming November 7-13, 2016 at General Santos City, Philippines. There are also 2 opening films and 2 Mindanao Vision exhibition program films.

A Romanian sculptor, Constantin Brancusi, once said: “who is no longer a child is no longer an artist”. A “ponpoko mountain” is an air playground equipment of white color, which is set at a park in Japan. It is a trampoline like a snow mountain and children are playing on its top. This short film expresses a “harmony” between the color of white and children in the unique landscape where there are domed curves, by using a combination technique of moving and still images.

Drawing from a travel account of a foreigner in the Philippines from the early 1900s, three oft-told stories from folklore are reimagined by a stranger from the future, bringing to light a people’s maladies and their attendant sorrows.

Ahmat and Sugih play with an invincible power who can grant them their wish, but also asks something absurd in return.

A clumsy robot is assigned to take care of an old lady who has dementia.

Under the military junta, two fat schoolboys do not want to serve in the military when they turn 21. They want to enrol in the territorial defense course instead, but they need to pass the physical test. Will fat boys like them be able to pass the test?

There once was a girl who was made up of junk. She looked really dirty, and she smelled like a skunk. She was always unhappy, or in one of her slumps-perhaps 'cause she spent so much time down in the dumps. The only bright moment was from a guy named Stan. He was from the neighborhood garbage man. He loved her a lot and made a marriage proposal, but she already thrown herself in the garbage disposal.

In a typical Singaporean family of three, life is well and comfortable. Unbeknownst to them, the forgotten fourth member is feeling neglected and alone. The only comfort she finds in her impending passing, lies in her grandson.

Boneca de Ataúro: Searching for the Lost Love is the first stop-motion film coming out the young nation of Timor-Leste. On this non-stop laughter and action-packed film, the main character—a handmade rag doll called Ataurina—while looking for her abducted partner, takes us into an adventurous journey through some of the most beautiful locations in Ataúro island (a new eco-tourism paradise destination in South East Asia). During the trip, Ataurina travels by all means encountering unexpected dangers and meeting curious characters across the island in a mission to get her loved one back.

The Man breaks up with The Girl, a traveler travels to the east to meet a girl coming from the East, and the traveler portrays himself as the main character within his novel, meeting another girl from the east. Three stories converge together, as reality, dreams and fiction overlap, without a clear distinction between, which causes them difficulty in trying to extricate themselves from their circumstances.

The film comes close to the world of Igme and Gani where things are quiet, colorful, and simple. Even pain is static, pulled in by their feelings of isolation, and gently eased away by their friendship. The conflict of the narrative arises when the system of oppression threatens their world that is each other.

Joselito, the doting uncle of Tere, pursues his beliefs against all odds to save her from the grim curse of the Santiago family.

"“We dream of the dream of the Other”, something that Psychoanalyst Jacques Lacan would have said in reaction to the recent commodity culture. Colonialism of different forms has occupied much more than the territorial: it occupied too, the way Filipinos imagine. The way Filipinos dream. Presented through various “cards” which most people from my generation would have touched is the history of this very generation – confused between the nostalgia of the past and the immediacy of the present – mediated with neocolonial imagination. Images are paralleled with a text – a dream – from The First Filipino, as one writer would call him."

Mara is scared of water. She has a rare condition that keeps her from touching any forms of liquid. As a single mother, her only pearl is her frisky son Elim, who was later on diagnosed with a life threathening disease. The boy’s only request is to learn how to swim.

An out of work comedian finds a machine capable of recording ideas, taking us on a journey through his mind.

Constantly bullied by his classmates, Kulas dresses up as a movie monster to scare them away. He soon realizes that another monster awaits.

During the course of one night, a young journalist is set to finish his investigative report that will expose the private army of an influential religious group. His work is interrupted by an e-mail from his source informing him about the recent conflicts inside the church, urging him to listen to three audio files containing confessions of members from the said religious group.

A man decides to take a bath. As the silence blends in to the sound of rushing water, he remembers some of the days of his life.

Twenty years ago, Habiba and Eric were neighbors. When Eric revisits her home to find her still living there with her husband, what seems like a friendly reunion turns into the gradual revelation of a painful secret from the past. An unflinching look at the consequences of abuse, Fundamentally Happy explores without judgment or condemnation critical issues such as trust, memory, relationships and consent.

Can an impersonator find his own voice?

At 68, Pepe has dedicated his life to impersonating rock star Joey Smith, a Filipino legend. Straddling the line between reality and imagination while sinking deeper into old age, he must undertake a journey of self-discovery to free himself from the shadow of his hero, and become his own man. Only then can he be free to write the song of his career.

Mbah Sri (95) is looking for the grave of her husband, who has been missing for decades, with one simple aim: she wants to rest in peace beside her husband’s grave.

Director Lam Canzhao leads a small film crew as they shoot a film about a stray dog in the streets of Guangzhou, leading the viewer into an unpredictable, peculiar and incredible journey. Shot documentary-style while employing characteristics of hybrid cinema, The Dog’s low-tech, casual style reveals a wealth of stories that reflects both the authenticity and occasional absurdity of the living situations of migrant workers and of those who otherwise live “below the line.”

After her failed marriage, Ariati descends into a downward spiral. Her waning spirits however is lifted, when she meets Aaron, who seemingly appears to be the better version of her previous significant other. She also meets Suhaillah, a free spirit who echoes her search for spirituality. Will these new connections breathe new life into her, and lead her to her own closure?

A young man is on a quest to find a mythical strain of cannabis called the SUPERPSYCHOCEBU. Along the way, he meets characters that appear to have lost their minds after trying it, one of them even possessed by the Devil, at which point he starts questioning whether he’s in for some good weed or just one hell of a bad trip.

Bangkok, an endlessly expanding megalopolis. In its heart is Thaniya Road, a red-light district, frequented only by Japanese men. Luck is one of the reigning queens there. Living alone in a luxury apartment, she provides for her large family in the northeastern provinces, near the Laotian border. One day Luck comes across Ozawa, a Japanese client with whom she had fallen in love five years earlier. An ex-soldier with the Japanese Defense Army, he barely ekes out a living, and has a modest room on skid row. When Ozawa has to go to Laos, she accompanies him to introduce him to her family and childhood friends. During this short stay, weary of his life in Bangkok, Ozawa starts dreaming of a quiet life in this little village, but becomes aware of the scars left by colonialism.

Iva is a single mother of a five-year-old girl and Hedi is her new neighbor. Iva falls desperately in love with Hedi (played by the director herself) and the two women begin a tumultuous relationship. Suddenly Iva’s father appears, and Hedi feels strongly attracted to him. It seems that only one world exists for Hedi. Her own. But what are Hedi's ultimate goals? Love? Or the freedom to take everything and everyone she wants? What does it mean to love? Is it always connected with sacrifice and oppression?

Shot mostly inside a car as the pregnant protagonist drives in the city, it depicts a woman’s life and resolutions through the perception of voices of her life.

DEAD SLOW AHEAD by Mauro Herce

"A post-industrial trance film set aboard a phantom-like freighter drifting toward shipwreck or oblivion, Dead Slow Ahead materializes its eponymous nautical telegraph into an abstract state of voluptuous inertia. The merchant ship Fair Lady is adrift in unspecified international waters, her crew diminished (if not devoured) by the machinery of the vessel as it heaves upon a vast open sea, with ports of call on a horizon that appears as if it were a post-apocalyptic landscape, however real, of late-capital commerce. A mostly Filipino crew navigates these relatively untroubled waters, while a similarly stilled camera inhabits the ship’s bowels and deck, accompanied by an incessant nautical din: the clang of cable, a radar’s beeping pulse, the hissing wind, and sheer mass bearing down." - Jay Kuehner, Cinemascope

Bagane Fiola's NETPAC Prize winner, Baboy Halas, tells of an indigenous family, one of the last forest people of old, coping with the unusual changes in their environment including the imposing lifestyle and customs of the more sociable tribes on the plains.

The Soil of Dreams explores the long night of Typhoon Sendong (Typhoon Washi) victims, generally, and a band of quarry workers, particularly. They resurface and pour buckets of mud and stones onto their bangka. The river has become abundant with stones and dreams, a product of the great flood.

A slice-of-life documentary about the rubber plantation boys in Zamboanga Sibugay. It’s about boyhood journeys and life’s realities told in a free-spirited yet melancholic manner.

A family is in ruins after the last male member dies. To salvage their future, the matriarch Kadiguia decides to look for a suitable husband for the eligible Tonina to continue the line of martyrs and warriors. Many miles away in the city, Aida secretly works in a hotel after falling victim to an illegal recruiter. She hides this fact from her family who believes that she is in faraway Kuwait working as a nanny.

A pair of homeless teenagers have their newborn child stolen away from them, and the two do everything they can to get him back.

When Iyay, a single mother, learns that her estranged husband has died, she drags the entire family on a road trip from Cebu to Dumaguete to attend the funeral. With her children - Hubert, who has Down Syndrome; Jude, a lovesick transman; Jay, who is living the bum life - as her passengers, Iyay drives her tiny multicab on a journey that yields unexpected stopovers, detours, and revelations. 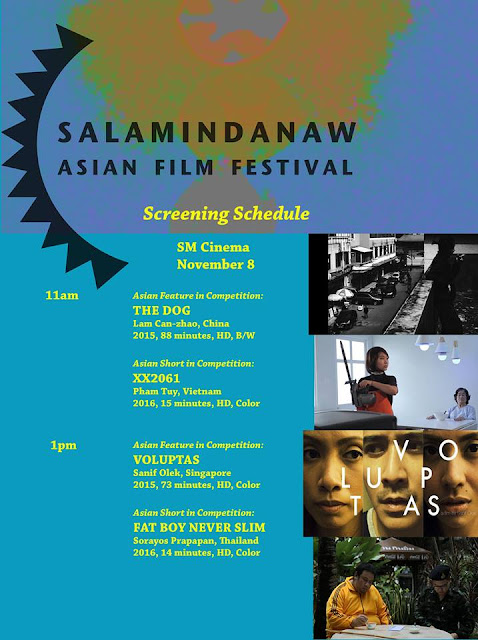 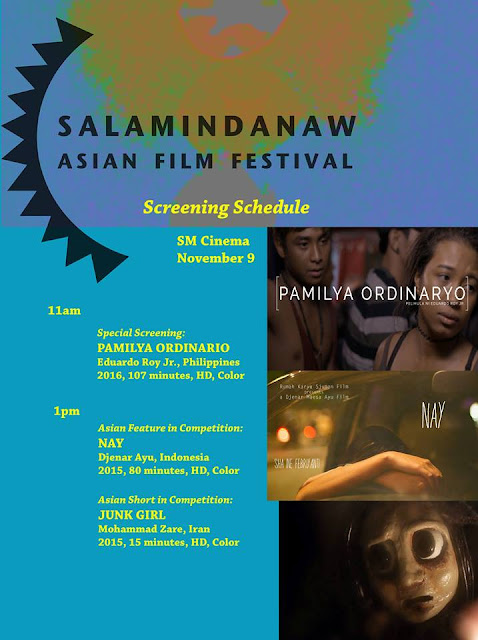 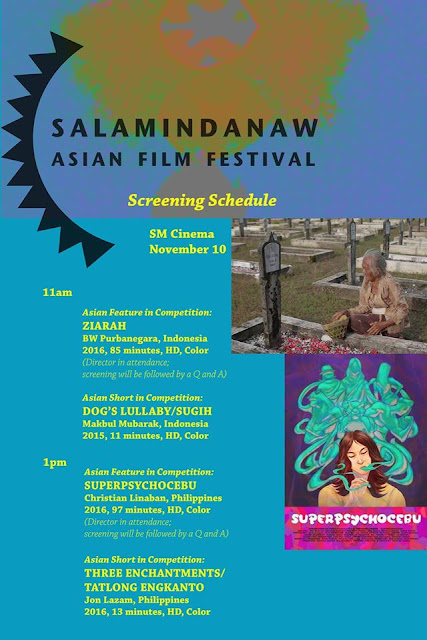 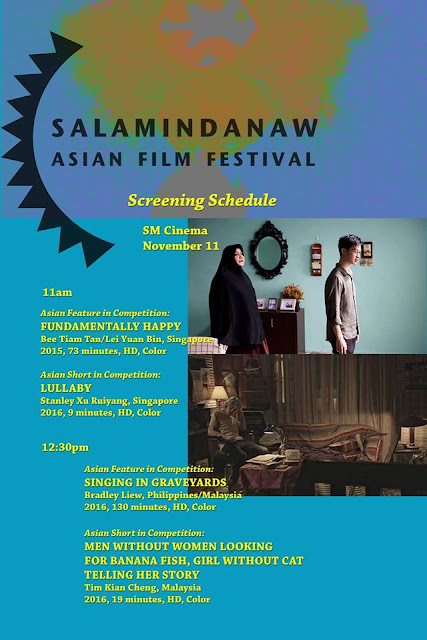 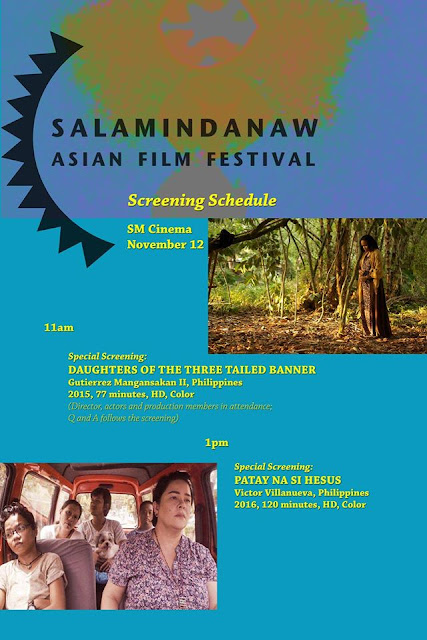 For more information, you can check SalaMindanaw Facebook Page.