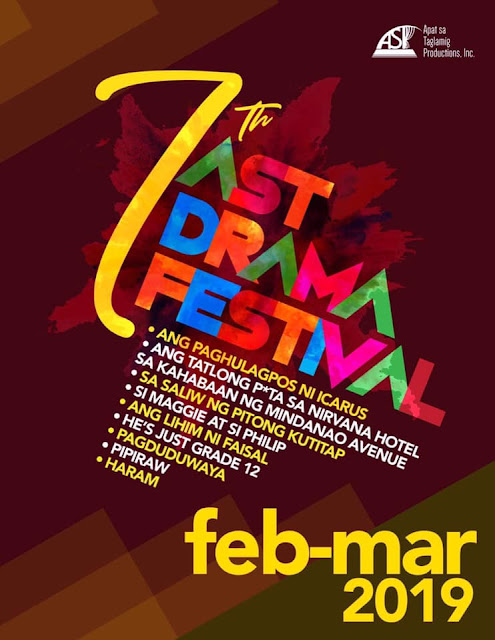 In celebration of the Arts Month, Apat sa Taglamig Productions Inc. organized the 7th Drama Festival which will be held at Koronadal National Comprehensive High School’s (KNCHS) Audio Visual Room, and KCC Mall of Marbel, Koronadal City. There will be a series of plays that portray Moro stories in the region.

“This year’s theme is ‘4teen: Explore, Expose, Experience.’ The drama fest is the best venue to experience local stories, to explore the humanities of the Moros, and to expose issues that are relevant but not often talk about,” said Anna Liz Cabrido, the Festival Director of the 7th Drama Festival.

“Theater arts is the highest and the most intellectual discipline of arts. This is the best medium to convey important messages because of its nearness to the audience since it is performed live,” said Anna.

“Slowly the people of South Cotabato appreciate the theater arts. We are thankful to all schools who formed a partnership with us. The provincial government of South Cotabato, the local government unit of Koronadal and the National Commission for Culture and the Arts are also supportive of our events.”

Apat sa Taglamig Stage Play Production is an organization which managed to stage original one-act plays in the province of South Cotabato. It aims to create art awareness and appreciation through producing stage plays.

The 7th Drama Festival is one of the activities for the Arts Month celebration of South Cotabato. The annual celebration of National Arts Month started with the signing of Presidential Proclamation 683, in 1991, declaring February as National Arts Month. Over the years, NCCA, as well as private and government agencies, has been organizing events and activities to highlight the artistic brilliance of the Filipinos.

SCHEDULE OF THE STAGE PLAYS:

For ticket reservation, you can drop a message to Apat Sa Taglamig Facebook page