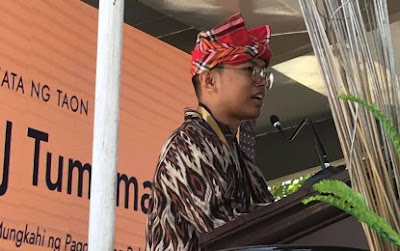 ORION, Bataan -- A 28-year-old poet from southern Mindanao was conferred the "Makata ng Taon 2019" award by the Komisyon ng Wikang Filipino (KWF) during the commemoration here of the 231st birth anniversary of the prince of Filipino poets, Francisco “Balagtas” Baltazar on Tuesday.

MJ Tumamac of General Santos City bagged the award for his poem, “Mga Mungkahi ng Pagdanas ng Dahas sa Maitum”, that tackled poverty, injustice, tribal war, and killings in the countryside, among some social issues. Maitum is a municipality of Sarangani province.

A native of Angono, Rizal, he has published a book and was a recipient of the Don Carlos Palanca Memorial Awards for his novels and Gawad Collantes for poems.

Richard Gappi, on the other hand, was third-placer for his “Dulok: Gunita ng Tubig”. Dulok is a Waray word for storm surge.

Valera was cited for his contribution to the enrichment of the arts in the field of music and Vera, for teaching the youth on stage play and theater arts.

Valera sang a few songs, to the delight of the audience. Vera, however, did not make it to the awarding ceremony held at the Pambansang Kampong Balagtas in the Orion Elementary School.

Before the event, guests participated in a parade from the school to the Hardin ni Balagtas in Wawa, a seaside village of Orion.

Flowers were offered at the monument of Baltazar.

In both the short programs at Hardin ni Balagtas and Pambansang Kampong Balagtas, Aetas were in the center stage.

Children from the Aeta Magbukun Tribe of Barangay Bangkal in Abucay, Bataan rendered song numbers in the Ayta language and performed native dances.

He said that the place of the story was Udyong, which was how Orion used to be called, and the main character, Kapitan Tuning, was an Aeta from Magbukun.

He announced that the United Nations Educational, Scientific and Cultural Organization (UNESCO) has declared 2019 as the International Year of Indigenous Languages.

Almario lamented that modernization contributes to the decline in use of local language.

Vice Governor Crisanta Garcia and Orion Mayor Antonio Raymundo said that although Baltazar was not born in Bataan, he was well-loved in the province that he considered as home.