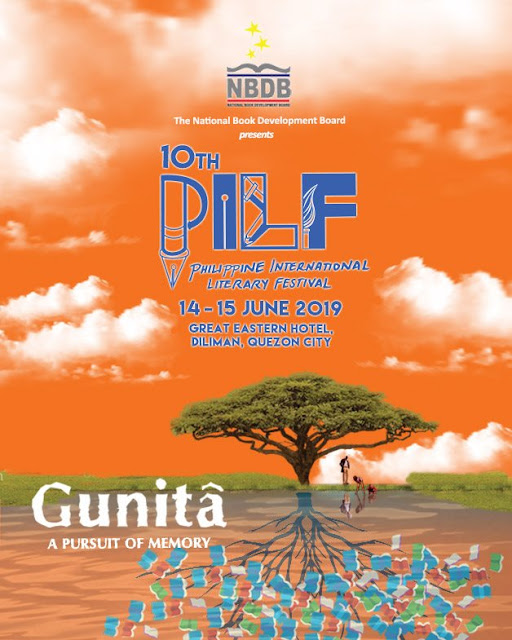 The pursuit of memory

The National Book Development Board (NBDB) invites all to the 10th Philippine International Literary Festival (PILF) at Great Eastern Hotel, Quezon City from June 14 to 15, 2019.

This year’s theme is “Gunitâ: a pursuit of memory” ─ making a mark in the age of forgetting by remembering our roots and fostering new voices through our literature. Gunitâ is the ability to remember. We are at a time when forgetting is common and we are chasing after our memories and history so that it is not forgotten.

The NBDB is an attached agency of the Department of Education (DepEd) with the mandate to support and develop the book publishing industry. The PILF is the agency’s biggest event which provides an avenue for readers, writers, illustrators, publishers, and other stakeholders to discuss issues and developments on writing and illustration crafts, readership, and book publishing.

What’s in store for participants?

The 10th PILF will feature various talks, workshops, performances, exhibits, and a book fair. Esteemed writers and book industry professionals will impart their expertise and knowledge.

National Artist for Literature Dr. Resil Mojares, a professor, scholar, essayist, fictionist, and cultural and literary historian will grace the event as the keynote speaker. He is the founding director of the Cebuano Studies Center and pioneer of studies on Cebuano and national identity formation. He is known for his books Waiting for Mariang Makiling: Essays on Philippine Cultural History, House of Memory: Essays and Isabelo’s Archive, among others.

Dr. Miguel Syjuco, Abu Dhabi-based Filipino novelist, journalist, professor, and author of Ilustrado-winner of several international prizes including the 2008 Man Asian Literary Prize, will be part of the opening plenary and other sessions throughout the festival. He is currently a Visiting Assistant Professor of Practice, Literature, and Creative Writing at New York University Abu Dhabi and a contributing opinion writer for the International New York Times.

Also joining the plenary session are Lualhati Abreu and Joel Salud. Lualhati Abreu is the author of Agaw Dilim, Agaw Liwanag which won the UP Centennial Gawad Likhaan Award in 2008 and the 10th Madrigal-Gonzales Best First Book Award in 2010. Joel Salud is the editor-in-chief of the Philippines Graphic magazine, and author of The Distance of Rhymes and Other Tragedies, Blood Republic, and The Chief is in the House.

Other activities will take place at the festival including tabletop games, spoken word poetry performances, and musical performances. Estela Vadal, the first robot that writes poems in Filipino─invented by programmer and author Marlon Hacla ─ will also create poems for participants. It takes your photo, writes a poem, and prints it. Estela Vadal has been part of several interactive exhibitions. NBDB will also have a booth for the registration of authors and enterprises engaged in book publishing.