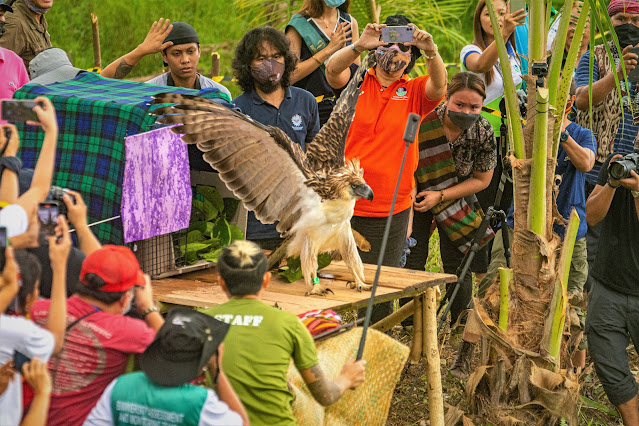 As part of the conservation efforts of the province of Sarangani, Philippine Eagle "Sarangani" (locally named as “Salagbanog”) is now returned to its natural habitat at Mount Busa range in Barangay Upo, Maitum, during its official release on Monday, June 13.
The release of the adult male eagle marked the culmination of the week-long Philippine Eagle Week from June 6 to June 13. This is the third time since 2017 that a rescued Philippine Eagle is freed back to the Mount Busa range, Sarangani’s highest peak and identified as Key Biodiversity Area.
“It’s important to take care of our Philippine eagles firstly because it’s our national bird. Secondly, this bird has a practical role for forest conservation because it’s the top predator. Having an eagle in a forest tells us a healthy ecosystem,” Philippine Eagle Foundation Executive Director Dennis Salvador said.
“We made its release a public event to help raise awareness of its importance,” he added.
The 5-year old Sarangani Eagle was found by a Tboli farmer on January 8, 2021 trapped among rattan vines near Salagbanog Falls in Barangay Ticulab, Maitum, Sarangani. The bird was turned-over to Philippine Eagle Foundation (PEF), by DENR Kiamba and Environmental Conservation and Protection Center (ECPC) at the boundary of Malungon and Davao del Sur on January 9, 2021. PEF took care of Sarangani Eagle and assessed its condition.
It was found to have a marble projectile on one of its shoulders, as well as an air gun pellet at the base of its neck. A surgery was done to save its life. The eagle also underwent a year of rehabilitation for its recovery.
According to PEF, they have already rescued 12 eagles since the start of the pandemic, many of which were either shot or trapped by hunters in the uplands.
Rescue, rehabilitation and release of wild eagles is an important component of conservation work to save an imperiled species like the Philippine eagle. According to PEF, species rehabilitation and releases do work for Philippine eagles. 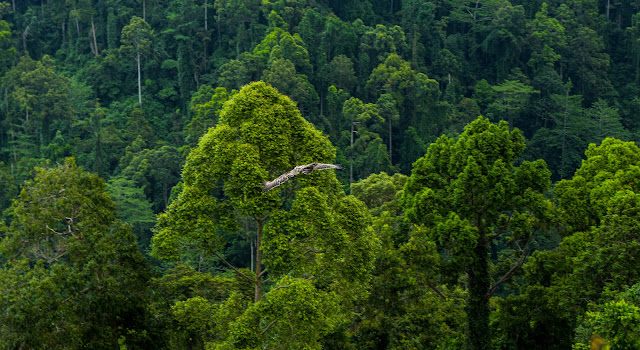 “Because of the presence of Philippine eagle, we continue to advocate Mt. Busa range as a local conservation area through provincial ordinance. This is to help strengthen its law enforcement and to have an annual fund for this effort,” ECPC Executive Director Cornelio “Kido” Ramirez Jr. said.
There is also an ongoing effort in the House of Representative, authored by Sarangani Rep. Rogelio Pacquiao, to declare this 114,000-hectare mountain range straddling the municipalities of Maasim, Kiamba and Maitum into a protected landscape.
Ramirez said they gave a technical presentation to concerned officials of the DENR’s Biodiversity Management Bureau the results of the joint Protected Area Suitability Assessment (PASA) on Mt. Busa complex and its immediate watershed areas.
The assessment was facilitated by the Mt. Busa Conservation Task Force, which is supported by the Sulong Kalikasan program of Gov. Steve Chiongbian Solon.
Ramirez, who heads the task force, said the PASA mainly cites the need to properly protect Mt. Busa and its resources from various destructive activities and developments.
He said studies showed that the mountain range has been continuously threatened by land conversion activities, kaingin or slash-and-burn farming, wildlife hunting, illegal logging and mining.
Mt. Busa is a declared key biodiversity and important bird area, and home to critically-endangered, threatened and vulnerable birds and other wildlife species.
ECPC said the area is a known habitat of some 434 rare animals and birds, among them the Philippine eagle. At least 18 flora and fauna species, including exotic orchids, are thriving in its mossy forest.
Once approved, the proposed protected area would be the second for the province after the Sarangani Bay Protected Landscape, which was declared in 1996 by then President Fidel Ramos through Proclamation No. 756.
“We have a great role to play in protecting our environment. We are the ones who act to save it. We must participate in the conservation efforts of our government and NGOs,” Ramirez said.
The Philippine Eagle (Pithecophaga jefferyi; "Haring Ibon" in the Filipino language) is one of the largest and most beautiful forest eagles in the world. It is found nowhere else except in the Philippines.
But sadly, this remarkable predator is also one of the world's most threatened raptors and IUCN lists it as a “critically endangered” species. With no more than 400 adult pairs remaining for the species, any effort to save and protect each individual bird is important.
PEF called on local officials and residents to do their share in ensuring the safety of eagles in their communities.
“If we see a Philippine Eagle, please do not disturb or hunt it. If we find this bird being disturbed or hurt, we should report it to proper authorities,” Ramirez said.
The event was organized by the Provincial Government of Sarangani through its Environmental Conservation and Protection Center (ECPC), in partnership with Philippine Eagle Foundation, LGU Maitum, Department of Environment and Natural Resources Region 12, Alsons Power Group, Sarangani Energy Corporation, and Siguil Hydro Power Corporation. (photos by Gary John Cabinta and LGU Maitum)
###
Labels: environment Maitum news sustainable development