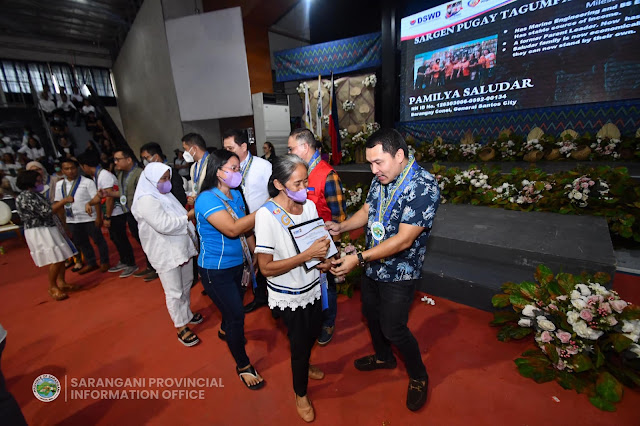 ALABEL, Sarangani (October 27, 2022) – The Department of Social Welfare and Development (DSWD) conducted the first provincial "Pugay Tagumpay" graduation ceremony for Sarangani and General Santos City on October 27.
A total of 464 individuals convened at the Capitol gym to represent their graduating families from the DSWD’s Pantawid Pamilyang Pilipino Program (4Ps).
There were 36 graduate-beneficiaries from Alabel; 60 in Glan; 42 in Kiamba; 30 in Maasim; 72 in Malungon; 45 in Maitum; 62 in Malapatan; and 117 in Gensan.
Among the beneficiaries was Chirsty Feleo from Barangay Poblacion in Alabel. Feleo said she will continue motivating other 4Ps to become self-sufficient like her.
"Bata pa lang ko, gusto na gyud ko muskwela, pero tungod sa kalisod sa kinabuhi ug tungod di gyud kaya sa among ginikanan, naningkamot ko og nahimong barangay scholar," Feleo said.
She completed her college education as Cum Laude and is now employed by the Philippine National Police as non-uniform personnel assigned at the Provincial Internal Affairs Service in Alabel.
She said what she learned from the program’s Family Development Sessions (FDS) was the importance of saving money. She believed that self-sustaining individuals could contribute to community development. 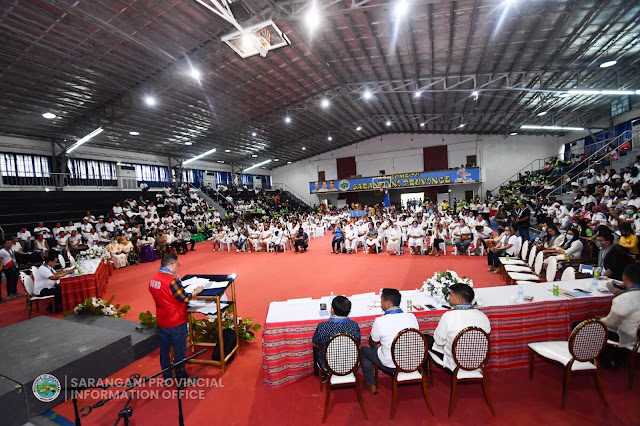 The "Pugay Tagumpay" was initiated as a way of celebrating the gains and success of the various household-beneficiaries for reaching the self-sufficient level of well-being.
Governor Rogelio "Ruel" D. Pacquiao inspired the graduate-beneficiaries by sharing his life story.
"Ang pamilya Pacquiao nisugod gyud sa pagkakabos,” the governor said. “Pinaagi sa grasya sa Ginoo og sa among pagpaningkamot maong kaluy-an, nakab-ot namo ang among kahimtang karon."
The Provincial Convergence Office 1 (PCO 1) of DSWD XII is currently implementing the 4Ps in General Santos City and in the seven towns of Sarangani.
Maasim and Malapatan started the 4Ps implementation during the year 2008, while the City of General Santos and the rest of the municipalities of Sarangani started in 2010.
After over a decade of implementation, self-sufficient beneficiary-households have emerged, which warrants a formal graduation to celebrate their success as well as the strong support of the partner-stakeholders in extending multi-sectoral interventions.
DSWD Assistant Secretary for Mindanao Affairs Arnel Garcia described the graduation of the 4Ps beneficiaries as a "feat" of the flagship program, which continues to uplift the lives of Filipino families.
"The DSWD commits to assisting more families achieve self-sufficiency through the 4Ps and its other programs and services to be able to contribute to building poverty-free communities," said Garcia.
DSWD XII Regional Director Loreto Jr. Cabaya commended the graduating households for "finally alleviating poverty and for generating permanent jobs and small businesses, which enables them to send their children to school and make them prepared to protect their households from sliding back into poverty." 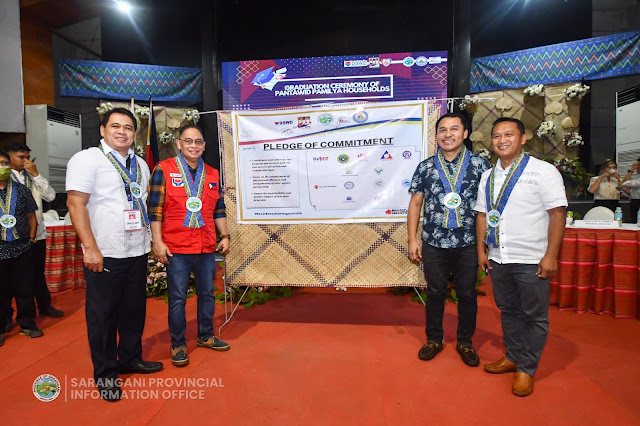 Through a ceremonial commitment signing, the local government units (LGUs), officials, and partner-stakeholders committed to implement an after-care monitoring program to check the status of the Pantawid Pamilya families who have graduated from the program.
The DSWD said the LGUs will be tasked with monitoring the graduate-beneficiaries "for the possible provision of other appropriate assistance to enable them to sustain or further improve their economic status."
Other partner agencies were ready to assist graduating beneficiaries in their journey to become self-sustaining individuals through the provision of livelihood assistance, skills training, and scholarships for their children, the DSWD noted.
Present during the event were Chief of Staff Engr. Gerald Faciol, representing Congressman Steve Chiongbian Solon, Board Member Ephraim Galzote, Provincial Administrator Atty. Ryan Jay Ramos, Executive Assistant Joey John Concepcion representing Gensan Mayor Lorelie Pacquiao, Councilor James Reganit representing Maitum Mayor Alexander Bryan Reganit, and Enrequito Daguplo representing Alabel Mayor Vic Paul Salarda. (Joshua John S. Pantonial and photos by Jake T. Narte /SARANGANI PROVINCIAL INFORMATION OFFICE)