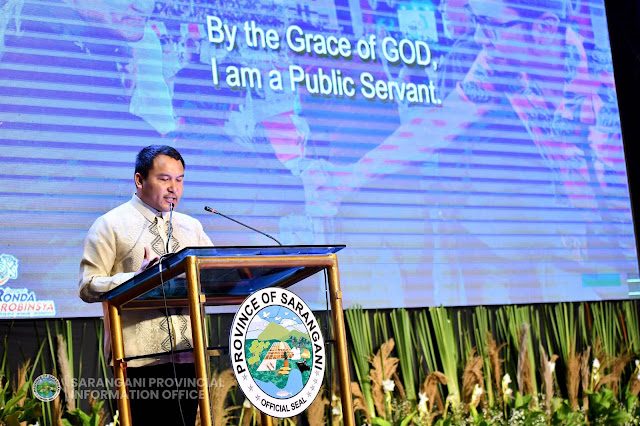 ALABEL, Sarangani (October 18, 2022) – Governor Rogelio “Ruel” D. Pacquiao bared the accomplishments of the first 100 days of his administration on Tuesday, October 18, citing his governance direction of bringing “public service closer to the people” would benefit closer even to those in “the farthest edges” of Sarangani.
He stitched his report based on his flagship program Sarangani Ronda Probinsya where he said it put “premium to people-centered programs” that improves barangay governance structures, promotes peacebuilding, preserves and promotes cultural integrity of IP and Moro communities, creates more educational opportunities for the youth and adult learners, and improves the quality of lives of Sarangans.
Pacquiao credited the significant contributions of the previous administrations particularly his predecessor Congressman Steve Chiongbian Solon “for paving the way” for his administration. 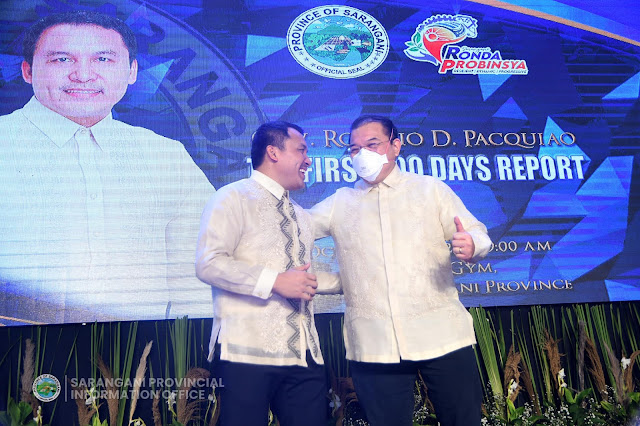 He said the active cooperation and collaboration of the department heads, officials, Capitol employees, and partners from various agencies and sectors had set his administration’s “transition and mobilization period into full gear.”
In his inaugural speech on June 30, he laid down his plans of crafting an integrated and sustainable food security blueprint to promote the agro-fisheries production. Now, he reported major steps had already been taken in the establishment of the Agri-Fishery Complex or the proposed Provincial Fishery Complex.
“This will boost inclusive growth in the fishing sector comprising of more than 20,899 registered fisherfolks and another 30,000 plus marginalized fisherfolks,” he said.
He said the framework for the five dimensions of the Food Security and Nutrition Plan such as food availability, accessibility, utilization, governance, and stability had been conceptualized as a “crucial step in our fight against poverty.”
As part of his commitment to provide free maintenance medicine for qualified senior citizens, Pacquiao said already 166 been served with the initial P7-million budget. He hoped to cater under the program a total of 38,718 senior citizens next year with a P40-million proposed budget.
As he vowed to upgrade health services, Pacquiao reported that Sarangani Provincial Hospital has completed processing of its Level 2 accreditation.
Once the national DOH Regulatory Department issues the License to Operate, he said “more Sarangans will be catered particularly in the Intensive Care Unit and Neonatal Intensive Care Unit. A wider range of surgical and medical procedures, equipment and facilities will finally be made available such as the secondary imaging, type 2 ambulance, tertiary laboratory with blood bank and many more.”
According to him, a P20-million fund had been secured for the establishment of the Provincial Dialysis Center while, a P20-million new mobile hospital will be purchased to deliver basic health services to our constituents in far-flung areas.
Among the sectors Pacquiao highlighted in his speech was the infrastructure where he cited various completed and ongoing construction of roads, water system, and other structures including the P8.5 million 3-storey legislative building in phase 5 inside the Capitol grounds which has now been completed.
Pacquiao also cited investment and tourism as among the sectors with “immense potential for development and expansion” and vowed to enhance and raise awareness for tourist sites to accelerate more economic development in the province.
He expressed hopes that the visit of Consul General Li Lin of the People’s Republic of China, under the Invest in Sarangani project, “will build stronger partnerships with the foreign consulates in order to promote Sarangani as a favorable investment destination.”
Invest in Sarangani, he said, will “link Sarangani’s investment opportunities to potential investors” and would revitalize the local tourism and economic industries “as we anticipate a post-pandemic boom which we definitely have to take advantage of.” 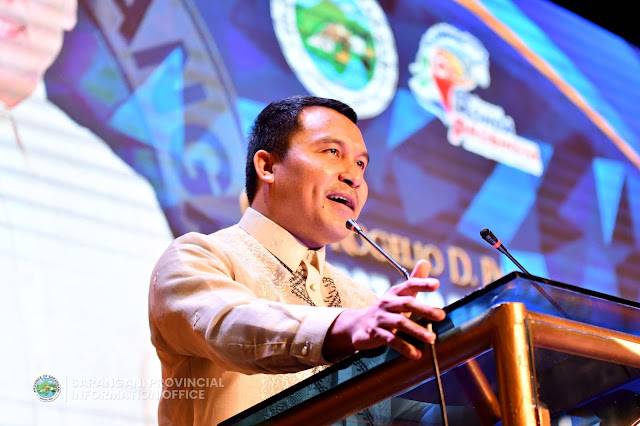 As he ends his report, he said the accomplishments were to “properly honor everyone who has contributed, in one way or another, in delivering on our solemn promises to the People” and to learn from experience and further intensify future efforts.
“By God’s wisdom, courage and strength, we can, and we will defeat the Monster of Poverty that is why I ask for your prayers as we enter a new phase of our governance,” Pacquiao said.
The 15th Regular Session of the 11th Sanggunian, presided by Vice Governor Elmer De Peralta, was suspended to pave the way for Governor Pacquiao to deliver his first 100 days report. (Beverly C. Paoyon and photos by Jake T. Narte/SARANGANI PROVINCIAL INFORMATION OFFICE)
###
Labels: news Sarangani