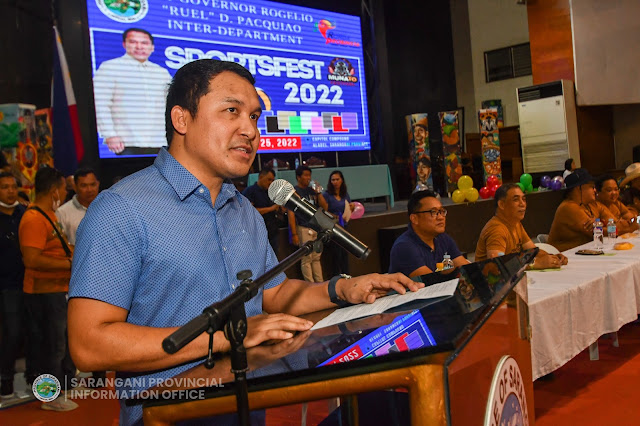 ALABEL, Sarangani (November 15, 2022) – Employees and officials flocked to the Capitol gymnasium as Governor Rogelio “Ruel” D. Pacquiao declared on November 14 the opening of the 1st GRDP Inter-Department Sportsfest of the provincial government of Sarangani.
The inter-department sportsfest is in line with the celebration of the province’s MunaTo Festival which is held every November.
Facilitated by the Sports Development Division of the Provincial Governor’s Office, the activity aims to promote wellness and fitness, foster fun and camaraderie through sports, and create a friendly environment among employees of the government.
Capitol employees of the different departments were divided and merged into teams with designated colors and will compete in a series of sports events for two weeks.
Vice Governor Elmer De Peralta said the sportsfest aims “to increase and strengthen our relationship with each other, that despite the different colors we have today, through the leadership of our governor, we are united and we are solidified into one.” 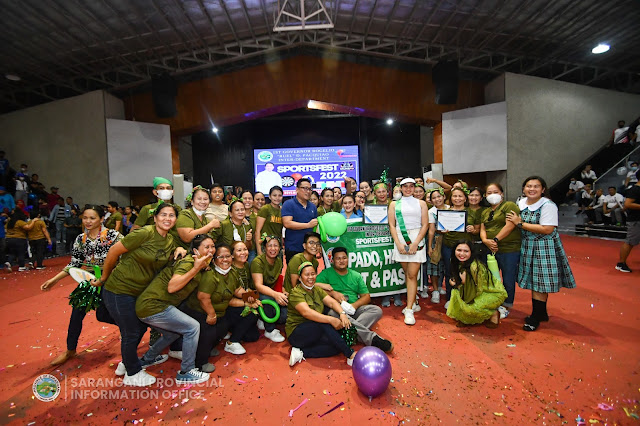 During the opening program held on Monday, employees participated in the parade within the Capitol grounds, which was followed by a Zumba at the gymnasium, a yell competition, and the mass dance competition which was the highlight of the program.
In the Ronda Probinsya Mass Dance Competition, the Green Team bested other teams and won as champion, while the Pink Team placed 1st runner-up, followed by the Black Team who won 2nd runner-up.
The Green Team is composed of the Provincial Administrator’s Office (PADO), the Human Resource Management and Development Office (HRMDO), the Information and Communications Technology (ICT) Office, and the Provincial Assessor’s Office (PASSO).
In his message, Governor Pacquiao encouraged the active participation of all the Capitol employees in the rest of the activities of the MunaTo Festival 2022. “Mas masaya, mas makulay, at mas makahulugan ang ating Munato Festival this year,” the governor assured his constituents.
He also delivered the good news to the employees regarding the Christmas incentives and bonuses all career and non-career employees will receive this December.
The governor also congratulated the Sarangani Provincial Hospital (SPH) for bagging the Department of Health’s Hospital Star Award, and the Provincial Disaster Risk Reduction and Management Council (PDDRMC) for being awarded “Beyond Compliant” in the Gawad Kalasag 2022.
The 1st Governor Rogelio “Ruel” D. Pacquiao Inter-Department Sportsfest will run from November 14-25 with several sports competitions including basketball, volleyball, kickball, bowling, and darts. (Jori Mae R. Samillano & photos by Jake T. Narte/SARANGANI PROVINCIAL INFORMATION OFFICE)
###
Labels: news Sarangani