Thou shalt not commit adultery 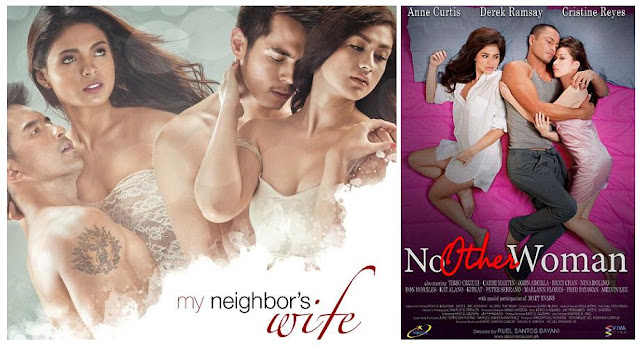 Faithfulness is important in a relationship. This element is essential in order for a relationship to last. This element is common theme in our local films (and teleseryes). Films such as No Other Woman and My Neighbor's Wife tackle this issue. As shown in the two films, being unfaithful has this destructive force that could ruin relationship. As the 7th commandment says, “Thou shalt not commit adultery”.

Though the two films have similarities with regards to its thematic content, they differ in presentation and story line.

The first film, No Other Woman has these unrealistic, exaggerated scenes, and often has "funny" dialogues. And because it is predictable you will definitely know the ending. The conflict between the two women (main characters: Charmaine played by Christine Reyes & Kara Zalderiaga played by Anne Curtis), in the film is funny that you could not concentrate on its dramatic importance. You just laugh every time they are together in a scene, because of their shallow and "catchy" dialogues. Well, this film hit the number 2 spot in the 2011 blockbuster films in the Philippines.


The second film, My Neighbor's Wife has its unique and unpredictable twists. I thought this film is a shalow one, but I was wrong. The conflict between the two couples --- Jasmine (Carla Abellana) & Bullet (Jake Cuenca); Giselle (Lovi Poe) & Aaron (Dennis Trillo) --- has a deep psychological implication, especially on the part of Aaron. The conflict started when Jasmine decide to break up with her husband Bullet because of Bullet's one night stand mistake with Giselle. But this single mistake also leads to another mistake done by Jasmine and Aaron. As you watch the film, you will notice that Aaron is the major antagonist because of its insecurities and ego tripping.

What is important from these two films is that we learn from the mistakes that the characters in the two films committed. Whether we experience it or not, the consequences shown in the two films are enough proof that being unfaithful is disastrous.

Leave a comment below and let me know what you think.
Thanks.
Labels: Filipino films media pop culture