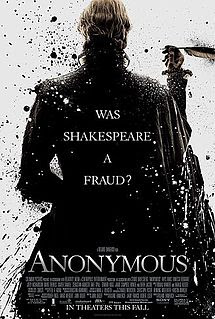 What if William Shakespeare did not write all of his greatest works? What if someone wrote it for him? These  questions are often asked by you while or after watching Ronald Emmerich's film Anonymous.

Anonymous is a political and pseudo-historical drama film. The film is about the fictionalized version of the life of Edward de Vere (17th Earl of Oxford, an Elizabethan courtier, playwright, poet and patron of art). He anonymously writes his ideas through the disguised of William Shakespeare. The film sets in Early Modern England (or commonly called Elizabethan period), where plays had impact on political and sociological landscape that time. London, though small compared to modern cities, was the largest city in Europe and become the cultural, political and social heart of England. The dirty setting and the impoverished condition of the people living in London makes the film realistic in its own sense.

If you don't have background in British History or Literature, you may easily get persuaded on the presentation of events happened in the film. Obviously the film's concept is derived from the ideas of Anti-Stratfordians ---  modern scholars who question the authorship of Shakespeare's plays. They argue that William Shakespeare either never existed, or, if he did exist, did not write any of the plays we attribute to him. They believe that another historical figure, such as Francis Bacon or Queen Elizabeth used the name as a cover.

Expect superb acting and impressive set designs and costumes, its twist and turns and its mind stimulating story. The stunning digitally-enhanced recreation of London , delivers the film into its version of the events  circa 1550-1604.

If you are interested to watch this film, you may visit

Leave a comment below and let me know what you think.
Thanks.
Labels: Elizabethan film film reviews Hollywood Shakespeare