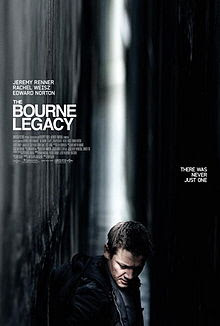 "There was never just one", as the film suggest. The Bourne Legacy is the fourth installment in the Bourne film series. Many film skeptics declared that this may become a flop. But they are wrong because this film becomes box-office hit without the help of Matt Damon (Jason Bourne). The story is about Aaron Cross (Jeremy Renner), a genetically modified agent who must flee for his life.

If you're not fond of dialogues, the first half of the film may be boring to you. But it helps to establish the plot of the film. The film is different to the previous installment because it has a new protagonist and story-line. The second half of the film starts the action. It presented the much awaited scenes taken from Manila, Philippines. It shows the busy life of the city. The film is good in presenting the breath-taking stunts and awesome fight scenes.

While watching the film at SM Cinema (GenSan), I overheard one of the viewers commenting to his friend that it is shameful to the Philippines the film's presentation of the shanties (one of the thrilling scenes in the film). Well, I cannot blame him for saying that. Maybe he did not understand the essence of it in the movie. It is reality, and besides the film series is noted for its realism. The foreign audience (esp. Caucasians) will respond to it as exotic. Just like other foreign action films that chose to film in places like Brazil, Columbia, India and Thailand.

In every film, there are awkward moments and The Bourne Legacy is not an exception. First, the scene of John Arcilla (the security guard) who is trying to sound American to Aaron (Jeremy Renner) and Dr. Marta Shearing (Rachel Weisz); second, the scene at the drugstore where Dr. Shearing bought medicine for Aaron. The pharmacist offers free medicine to Dr. Shearing (weh?); and lastly the scene in the house where Marta hide (for a while). When the owner of the house came, she shouted "Magnanakaw" to the Caucasian woman (Oh c'mon!). Despite all of its awkwardness, we are thankful that they chose to shoot most of the scenes in the Philippines. We hope that more big production films will shoot in our country in the near future.

In all the film is great in justifying their claim as action-thriller movie. How I wish our Pinoy action films will "upgrade" in terms of story, directing, editing, stunts and fight scenes. I hope they will cater it to this generation of audience who are more knowledgeable in terms of its technicalities. Well, as for now, we are hoping for the best.

note: The Bourne Legacy is now showing at SM Cinema (GenSan). Try their digital theater and experience the thrill of the film.

Leave a comment below and let me know what you think.
Thanks.
Labels: action film Bourne series film film reviews Hollywood