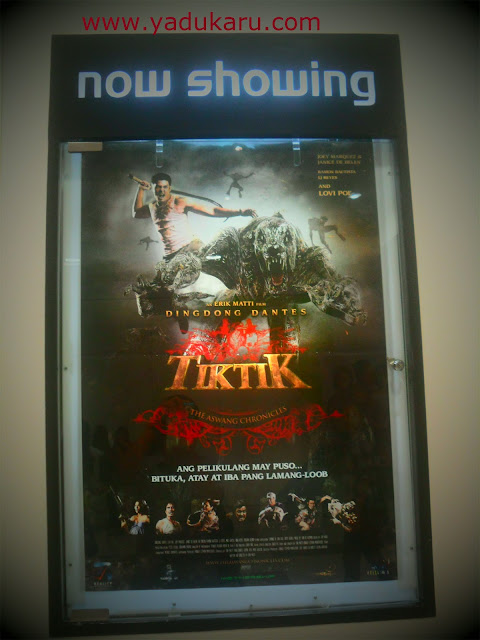 In Philippine folklore, Aswang is one of the creatures that is really frightening and at the same time enigmatic. I remember when I was a kid, my mother always tell stories to scare me so that I would behave. But my amazement was more dominant than fear. Since then, I am fascinated in this creature (as well as other Philippine demonological creatures). Whether in stories, books or films, I love to know more about this creature and the psychology behind it. When I heard about TIKTIK: The Aswang Chronicles, I get excited because another film was made that talk about Aswang.

TIKTIK: The Aswang Chronicles is directed by Erik Matti and produced by DonDon Monteverde - a collaborative work of Reality Entertainment, AgostoDos Pictures (Dingdong Dantes' company), Post Manila and Mothership (a sister company of Reality Entertainment & its post-production arms), and GMA Films.  This P50 M budget film makes history in Philippine cinema. TIKTIK is the first pinoy film shot entirely in green screen. The film was developed over a period of 6 years. Various creative artists collaborated in this project such as Peter Collias, a renowned scenic artist (Moulin Rouge, Dark City, Matrix) and the brilliant writer Michiko Yamamoto (Ang Pagdadalaga ni Maximo Oliveros). The film is about Makoy (Dingdong Dantes) who wants to reconcile to his girlfriend Sonia (Lovi Poe).

"Direk Erik wants the film to look beautiful and well art directed. So instead of deciding to shoot in different locations, he and Dondon figured to build a studio in a warehouse and shoot everything there." In fairness, they did it nicely. For example, the house of Sonia was creatively constructed to look old and rusty. It deviates to the idea of hunted house as typically scene in Pinoy Horror Films.

Stunning visual effects is presented in this film. As more Pinoy films produced this kind of genre, they are getting improved (depending on the artists). Because they are aware that Filipino viewers are now sophisticated. They can now differentiate lousy effects to an awesome one. I am happy that our local producers are taking risk in making this kind of movie(s). I am sure in the near future more of this kind will be released.

The film delivers the punchline well. Its dialogues are not corny and "shallow". The elements of horror, action and comedy blended together and created an entertaining film. The characters also progress throughout the film. Like the character of Makoy who have changed from being a short-tempered and conceited Manilenyo to a brave and responsible husband and father.

You also notice lots of product placement in this film. Like Grand Matador Brandy, Lips candy, Zest-O juice drink, Boy Bawang, Malboro and Mighty cigarettes. Whether intentional or not, we cannot blame the producers for doing such thing. This film has huge expenses and needs some financial assistance.

All in all the film is good. Filled with masculine action plus comedy wrap in a horror flick. I am expecting a sequel (from the title itself and of course the results of its ticket sales) that has new story and set up. I am looking forward to it.