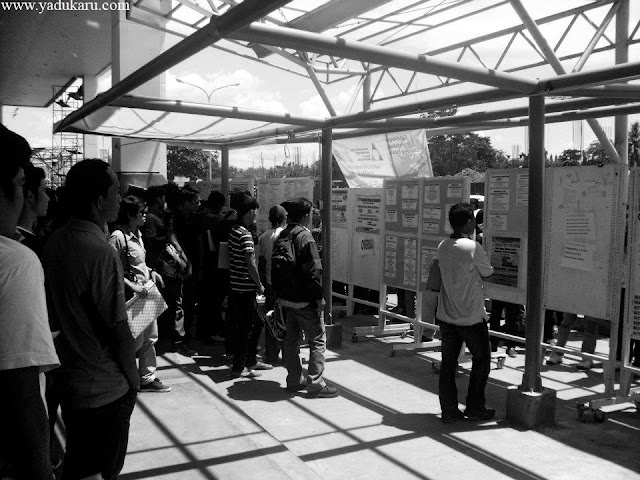 March is a month that the graduating students are celebrating their graduation. This is their special moment in which they reap the benefits of studying hard in school. Aside from thesis and graduation requirements, they are also concern about their careers after graduation. These students are worried about their future. That is why job fair was created to ease their worries. But is this enough for all the graduating students this year?

Job fair (a.k.a. career fair) is an exposition for employers, recruiters and schools to meet with prospective job seekers. It is an opportunity to meet the (possible) future employer(s). Graduating students and as well as other job seekers take advantage of this event to try their luck or to search their possible employers. For some, they get the job that they have applied, while some are not. Some trusted this concept and some abhor it. A friend of mine once told me that this Job Fairs is just a form of survey to monitor the unemployed in the country. At first, I didn’t mind it, but as I attend and observe many Job Fairs I started to change my perception about it.

Last year, the government boasted that they cured the high unemployment rate in the country. According to Sec. Rosalinda Baldoz of the Department of Labor and Employment (DOLE), the unemployment has gone down. She said that based on the Labor Force Survey (LFS) of the National Statistics Office (NSO), the country’s unemployment rate is now pegged at seven percent or 2.8 million from 7.1 percent in July 2011.

But our government seems too excited to broadcast this claim. According to Social Weather Station (SWS) Survey, the unemployment rate went up in the third quarter after falling in the previous three months. A SWS report showed the rate climbing to 29% in an August survey from 26.6% in May. The rate previously hit a record high 34.4% in March. The jobless Filipinos in the third quarter comprised largely of those who had resigned (12%) or lost their jobs (13%) and first time job seekers (5%).

It seems that there is inconsistency with regards to unemployment rate in the country. If you are not fond of it you get confuse or irritated with its figures. If you have a job, you are confident and do not bothered with it. But if you get laid off or jobless, you start to get alarmed and panic.

According to the book called The Guerrilla Tactics, “unemployment is simply the measure of the imbalance between what tasks to be done in society, and the time it takes to recognize and mobilize the resources that are needed.” To illustrate this point, I will give you an example.

We cannot deny the economic benefits brought by the mining industry in a country. If handled properly, it can boost the economy and it may trickle down its effects to the ordinary citizens. Since the Philippines is blessed with mineral resources, many foreign (as well as local) investors are interested to invest in our country. If they’re lucky, they will operate and eventually hire people for operation. There are more tasks to be done in this industry. This scenario is the same as the other industries. As the book suggests, “there are an unlimited number of problems in the world today, therefore, there are an unlimited number of jobs to be performed.” It is just a matter of anticipating this trend so that you are prepared when the opportunity comes.

The book also said that “in the emerging work world, the unemployed must trained in two life systems: the self-directed process of personal ability identification, job targeting in problem areas, and communication of potential value and benefit; and the skill edge (skills backed by knowledge) related to a job target area with relevant applications.”

Wow! What a wonderful idea! But, what if this concept doesn’t work for some job seekers? What if they have a different mindset? Has a different situation or environment?

In that case, the government must exert more effort in reducing the unemployment/underemployment in the country. Our government should have a career guidance workshop or counseling. This program should be open for all (students and non-students). We are aware that DOLE has this kind of programs, but I think it is still not effective in guiding us for our careers. In this volatile economy, we cannot assure that we are safe and secure in our job (if employed). Or if we can get the job that we want (if unemployed). Being ready and equip with proper knowledge and skills can guide us in our careers. But with so many problems that our country is facing, I don’t think this will eventually happen.

Leave a comment below and let me know what you think.
Thanks.
Labels: career DOLE graduate job Job Fair philippines