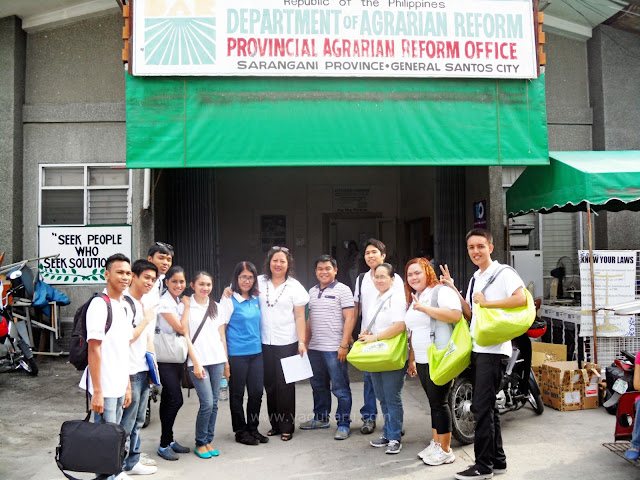 Being a volunteer in various NGOs is a fun yet very challenging experience. As Community Organizer and Documenter it helps enhance my skills and builds my confidence in dealing, organizing and handling people. It widens your horizon and deepens your sense of understanding in the world. You can explore places that you have never expected. In the low land or upland, in the cities or in the remotes areas, nothing can stop you in offering your service to those in need.

One of the recent volunteer works I have experienced was the DAR-PAMANA Project. This project is initiated and funded by the Office of the Presidential Adviser for Peace Process (OPPAP). We conducted Barangay Workshop Consultation (BWC) in the three chosen municipalities – Malapatan, Kiamba & Maitum – in Sarangani Province. The SOCSARGEN Peace Network was appointed by the Department of Agrarian Reform (DAR) to conduct the BWC in 50 barangays in the said municipalities. OPAPP collaborated with DAR in implementing the PAMANA project.

“PAMANA (PAyapa at MAsaganang PamayaNAn) is the national government's program and framework for peace and development. It is implemented in areas affected by conflict and communities covered by existing peace agreements. A complementary track to peace negotiations, the Program’s main strategy is to bring back government to PAMANA Areas, ensuring that the communities benefit from improved delivery of basic social services and are served by responsive, transparent and accountable government units. For the period of 2011-2016, PAMANA will be implemented in 48 provinces where each area will receive development programs according to the specific needs of the people residing in that region.”

The objectives of the PAMANA program are as follows:

2. Improve governance through partnerships with national and local institutions, building capacities for governance, and enhancement of transparency and accountability mechanisms; and,

3. Empower communities and strengthen their capacity to address issues of conflict and peace through activities that promote social cohesion.

“Pillar I: Laying the foundation for peace through policy reform and legislative action. Development interventions shall also be pushed in housing, ancestral domain, banking, and in other areas (e.g. IDP shelter assistance, mining/timber licensing agreements in IP areas).”

The projects that were given to the 50 barangays fall in the Pillar II category. It has p300, 000 budgets for every three years – in all there is P900, 000. The beneficiaries should identify at least 3 projects for successive three years.

My partner was Mr. Ryan Carbero, my fellow volunteer in SPNI and in Hearts and Brains Inc. (HABI). Ryan was the facilitator while I’m the documenter. Sometimes we change roles depending on the circumstances. In the course of the PAMANA project, Ryan and I had eight barangays. In Malapatan we had barangay Kinam and Poblacion. In Kiamba we had barangay Katubao, Tamadang and Salakit. While in Maitum we had Wali, Upo and Pinol. Among the barangays we have visited, three were unforgettable. They were Kinam, Katubao and Pinol.

Kinam is unique in its own ways. The road going to this barangay is really fun and challenging. Before you reach Kinam, you will experience crossing one river fifteen times. You will pass many mountains, and if it is raining, the road is wet, muddy and slippery. The river increases its volume and its current is getting stronger. Only few vehicles like the weapon vehicle could pass its trail. Since this is our first assignment, we were really determined to pass these obstacles in order to conduct BWC in that barangay. Because of the geographical location and the slippery-muddy road condition (it rained the night before we arrived) we have reached Kinam at twelve noon (a half day travel). We had a few minutes of “fast lunch” and introduction of ourselves to the Barangay Officials. After that we started to conduct the BWC. We were thankful that they were cooperative. Because it rained that day, we had an overnight stay in Kinam. We slept in the house of Mr. Joseph Silva, one of the barangay kagawads.

Barangay Katubao was declared in the 1996 Peace Agreement as one of the Peace and Development Communities in Mindanao. Government agencies and NGOs flock to the area to give assistance. Many peace and development projects were initiated to help the people in Katubao. However, this effort was ineffective because most of the projects were not successful. This was due to lack of unity, misunderstanding and no accountability and transparency in the implementation of the projects. But we assured them that it will not happen again if there is a Memorandum of Agreement (MOA) and participation of various sectors.

After we conducted BWC in Katubao, I realized that it is good to enroll in Conflict Management course/subject. So that I (we) have the right knowledge and skills in handling different kinds of conflict.

In the case of barangay Pinol, I was really amazed with this barangay because it was my first time to witness MNLF women soldiers. When we arrived in this area, we were surprise because many MNLF soldiers were scattered in the barangay. We thought there was a commotion before we arrive. They were there because the United Nation (UN) Peace Keeper Panel visited their camp for a meeting.

Barangay Pinol also serves as an evacuation place to their neighboring province of Sultan Kudarat. Whenever there is conflict in that area, the people evacuates and stays in Pinol. This barangay is open for those victims of conflict in nearby towns. It is good to know that there extending their help to our fellow Filipinos.

After the BWC, we get the chance to visit the Pinol cave. This cave was discovered in 1991. The archeologist found artifacts therein and brought to the National Museum. To control the anarchy in the area, peace forum was conducted which was attended by the different sectors and government agencies. The anthropomorphic (human-shaped) burial jars were products of local artists and potters from hundreds of generation. There are replicas of burial jars displayed in the Municipal Hall of Maitum.

Barangay Pinol is also famous for their bat sanctuary. Thousands of endangered Giant Flying Foxes (Pteropus vampyrus) are found not only in Pinol but also in barangay Ticulab. This bat is considered as the world’s largest bat; it can attain a wing-span of over 6 ft. and weigh well over 2.5 lbs. Unfortunately, we did not see the bats up- close because we have no time to explore the place. We just saw it from afar while riding a pickup.

I did not regret in accepting this project. I have learned so many things in visiting these areas. Each barangay is unique in its own way. Each has different stories and sentiments to tell. Through interviews and socializing with the communities I learn to understand their plight. I somehow understand the complex conflict in Mindanao.