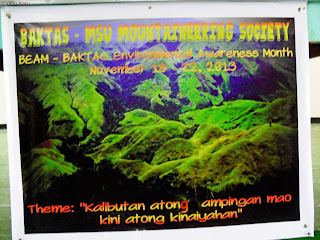 The Baktas-MSU Mountaineering Society celebrates its Baktas Environmental Awareness Month (BEAM). As part of their activity, they have conducted an environmental symposium to the first year students of College of Agriculture & Fisheries in their Civic Welfare Training Service (CWTS) last November 20, 2013 at MSU-AVR, Fatima General Santos City. With the theme: “Kalibutan atong ampingan mao kini atong kinaiyahan” - the symposium aims to raise awareness to the students of MSU in the current problems in our environment.

The speakers during the event come from the Mindanao State University-Graduate School Program. They are taking up Masters in Sustainable Development Studies. The speakers presented their research to the students to give them background and information not only in conducting research but also in addressing various environmental concerns.

The first speaker, Mr. Ariel Oberez, presented their study entitled The Perennial Flooding in Barangay Baluan, General Santos City: A Preliminary Study of the Causes and Impacts. The study is about the preliminary investigation of the perennial flooding in Barangay Baluan, General Santos City. “The study found out that flooding is a natural phenomenon and occurs when floodwater submerges land usually not covered by water. However, the increasing occurrence of flood is attributed to population growth, urbanization and even climate change. The inadequate drainage system, development activities and human settlement along waterways, improper wastes disposal, and the continuing land conversion have been identified as the causes of frequent flooding in Baluan.”

The second speaker, Ms. Ferly Queen De-Ala, also discussed their research entitled Occurrence, Extent and Effects of Sedimentation/Siltation Activity in Silway River, General Santos City (A Case of Climate Change Indicator for Aquamarine Life). "The study focuses on the occurrence, extent and effects of sedimentation or siltation activities in the Silway River, with concentration at the adjacent community in Barangay Labangal and Barangay West District of Silway, General Santos City. The study confirmed the existence of either bioaccumulation or eutrophication which affect not only the marine organisms but eventually the health of humans."

After the presentation of their studies, the students asked questions to the speakers.

"Baktas-MSU is a first-ever student-based mountaineering and environmental outdoor group of Mindanao State University General Santos City organized in year 2000. Baktas is leading the campaign to preserve and rehabilitate the natural environment and engaged in activities aimed to rescue the green planet by means of a challenging sports rooted on environmentalism: MOUNTAINEERING. Pro-active and dynamic, the society is dedicated and committed to uphold the true principles of responsible mountaineering. Baktas-MSU is proud member of Mountaineering Federation of the Philippines, Inc (MFPI)."

note: The study that they have conducted was a group research presented in Sustainable Development Forum last October 20, 2013

Leave a comment below and let me know what you think.
Thank you.
Labels: environment event forum Gensan MSU-GenSan sustainable development