‘The Unveiling’: The Story Underneath the Veil

Mindanao filmmakers are now making their mark in Philippine cinema. Various film festivals in Mindanao are held every year to showcase their talents and creativity. Cinema Rehiyon, Mindanao Film Festival (MFF) and the SalaMindanaw International Film Festival (SIFF) are some of the venues for filmmakers to present their stories to the wider audience. It implies that Regional filmmaking is growing and evolving. It has significant contribution in Philippine Cinema.

As you notice, most of the filmmakers who are participants in these film festivals are young filmmakers. For example, Glenmark Doromal – ANG WALAY KAHUMANANG ADLAW (The Infinite Sun) – was the big winner in the recent 9th Mindanao Film Festival held in Davao City. He is only 20 years old, a college student in College of St. Benile, and a resident of Iligan City.

The SIFF held last November 26-30 proved that GenSan (or SOCCSKSARGEN in general) is not behind in terms of filmmaking. International and Filipino filmmakers joined in SIFF. According to Teng Mangansakan, the Festival Director, “the Festival is anchored on its vision to be a mirror (salamin) of peace (salam) in Mindanao, thus the name SalaMindanaw.” SalaMindanaw cannot be completed without the 1st GenSan Summer Film Camp. The participants of this workshop made films (as one of the requirements of the film camp) and submit it to the SIFF. The Workshop Category was made out of this film projects.

A friend and a fellow batch mate in the film camp - Ephraim Joshua Laudan U. Nolasco - won the Best Film (The Unveiling) for the Workshop Category in the recent SIFF. He is one of the brave filmmakers that I have known that tackles sensitive themes to open our eyes in the realities of life. His first film DUKOT was featured in the 5th Cinema Rehiyon held in Los Baños Laguna.

Josh learns a lot of techniques in filmmaking while he is working with Direk Teng in his film Qiyamah. As he said, “Direk Teng is my master. He opened my eyes in the world of cinema”.

In an interview, Josh talks about his film – THE UNVEILING – and how he came up with the concept.

Josh, tell me something about yourself?

I’m Ephraim Joshua Laudan U. Nolasco. I was on born September 10 1989, I’m 24 yrs old. I am the son of public school teachers - Ren and Gemma Nolasco. I’m a simple guy who loves to discover new things. I like sports like basketball. I have also natural inclination to arts. Before I started to do film I was once a missionary for the Church of Jesus Christ of Latter-Day Saints for two years. Then after that I enrolled again as a Mass Communication student of Notre Dame University – Cotabato. Luckily I met direk Teng Mangansakan and started working in a film production.

How did your parents take to your desire to becoming a filmmaker?

They’ve been supportive all the time. Everything that I do, they are always got my back.

What's your feeling after making your short film THE UNVEILING?

It was Unbelievable man. I mean it was a lot of pain in our butts just to meet the deadline then suddenly it was recognized by SalaMindanaw International Film Festival (SIFF) so it was really a great blessing for us (me and my crew).

What is the concept or the inspiration behind THE UNVEILING?

Ahm… actually it was based on a real incident. I was watching a movie in a cinema in our city and I heard someone was moaning. So I looked around and saw where that moaning is coming from. And when the moaning stops a girl stood up and wore her VEIL (hijab), so I was so shocked. That time I felt embarrassed, because even I’m a Christian, I know a little of Muslim culture because of my (Muslim) relatives. For me that incident was a big disrespect to their beliefs. So I decided to open the eyes of many about the reality and try to tell them that they can still change.

Are you expecting negative feedbacks, especially in the Muslim community?

Describe THE UNVEILING in one word.

Can you tell me the challenges that you and your crew encountered during the shooting of the film.

There were a lot of challenges that we have encountered while shooting this film. For example, writing the script was a big challenge due to the fact that it can make or break my career. Because of its sensitive theme, I have to be careful not to be offensive to our Muslim brothers and sisters. And also this film is new to us because we are used to make a 5 minutes (short) film. The Unveiling is a 16 minutes film, so we have to re-shoot some of the scenes because of the problems we have encountered during editing.

Describe your state of mind when you saw your film in the cinema.

It was worth it (the blood, sweat and tears). When I saw THE UNVEILING, it was amazing. I almost cried because after the long days of work it finally reaches the big screen.

Any interesting comments from the audience during the screening?

When I was going to the comfort room I heard two muslimas talking - “sana the unveiling ulit” (I hope THE UNVEILING will be shown again). As a director, that was the reward of our work.

If you are given a chance to change the ending, what would it be?

I will change nothing.

What did you learn from this project?

I’m still a beginner. I’m nothing without my crew and my mentor Direk Teng Mangansakan.

Any advice that you can give to those who want to make their own films.

Ahm.. Write a story that is close to you, and show that story. Express it the way it should be expressed. And don’t be a FILL maker, be a FILM maker.

After THE UNVEILING, what's next?

Ahm… write more scripts, research for something new. Collaborate with my other batch mates in the GenSan Summer Film camp (Batch 1 Graduates). Attend another film camp. Spend a little time with Ms. Special and other friends before another project will start. And I am hoping to have another interesting project like THE UNVEILING. 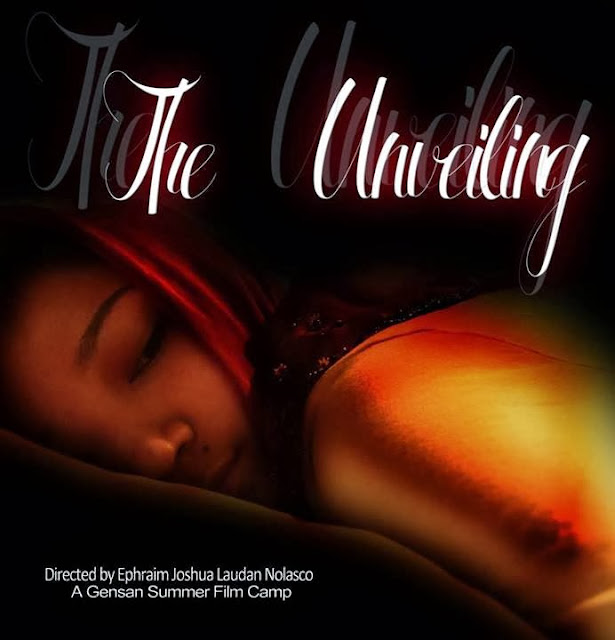 Synopsis
Wearing a hijab is a covenant for a Muslim woman. For Farishya who is raised in a cloistered Muslim family, pious as she may seem, her hijab hides mysteries even she cannot understand. What will happen if she will unveil herself?

Josh is one of the delegates in the 6th Cinema Rehiyon this coming February 19-22, 2014 in Cagayan de Oro City.