I am proud to say that all of my batch mates in the Summer Film Camp 2013 really did a great job. Watching their films in the SalaMindanaw International Film Festival (SIFF) last November 26-30, 2013 proved that they have what it takes to be a filmmaker. One of them is Joe Bacus whose film showcases novelty and courageousness.

In an interview via facebok, Joe tells about his short film entitled IKA-TULONG PUTAHI (Recipe No.3).

[Yadu Karu] Joe, please tell something about yourself?


[Joe Bacus] This is one of the toughest questions that I can’t answer in seconds. I have to Google myself first (lol). Okay, let me introduce myself to you Yadz, I’m Joe and I love music, paintings, video games and films. I collect action figures too.

[Yadu Karu] When did you start making films?

[Joe Bacus] I guess that was in 2005. Once there was a very high-tech Sony Walkman phone that has a capability to edit a video got my attention. We started a 2 minute short film with my girlfriend then followed by semi-stop motion film using my action figures. It felt great. Then in 2009 (Devcom years) DSLR cams featured Full-HD video capability resurrected my filmmaking dream. Around 2010 we started our 10 min comedy short film with my classmates. Too bad we didn’t finish the film…hehe.

[Yadu Karu] What’s the inspiration behind the film IKA-3 PUTAHI?

[Joe Bacus] Sion Sono’s film Coldfish reminded me of something that happened around 5 years ago in our place. It was horrible. That very night after watching the film with our film batch mates (in the Summer Film Camp), I decided to share our story too.

[Joe Bacus] I was a bit disappointed. Almost 50% of the final script didn’t make it. After the final cut version, I showed it to some of my friends and some scenes are effective so I said to myself – not bad at all.

[Yadu Karu] Describe your state of mind when you saw your film in the cinema.

[Joe Bacus] Watching your very own film on very wide screen is an every amateur filmmakers dream. I have watched it like a thousand times since post production at home, but the feeling watching it inside the cinema was different. I really want to enjoy my first viewing but when the audience reacted, I shifted my attention to their screams and it became more exciting. It was priceless.

[Yadu Karu] Can you tell me the challenges that you and your crew encountered during the shooting of the film.

[Joe Bacus] As early as pre-production we encountered a lot of headaches. Casting was one hell of a problem because of the script. A friend of mine had a fight with his wife after reading the script so he declined. Then some of the actresses I have invited didn’t bother to finish reading the script after sequence 4. Then during the production, two of our actors got injured while playing soccer and the other guy with vehicular accident. Our last day of shoot wasn’t easy for him. He was on crutches and we have to hide his leg during filming. Thank God he was able to act normally as if everything is normal. And lastly we have to change location for some reason. Almost everything was wrecked after that.

[Yadu Karu] Describe the IKA-3 PUTAHI in one word.

[Yadu Karu] When I saw your film at the SalaMindanaw International Film Festival last November, I was really amazed in your make-up/prosthetics that you used in your film. What’s the inspiration behind it?

[Joe Bacus] I used to watch MOVIE MAGIC many years ago and it became a dream to make some miniatures and do make up in a film project. So in this project I will make sure that everything will appear realistic. I would like to give that credit to my partner Mr. Orpheus Nery who has done a great job.

[Yadu Karu] I heard that your film was modified so that it would appear somewhat “safe” to the general audience. Can you tell me the original scenes/story in your film?

Yes. Like I said I want to be realistic as possible but of course I have a very high respect with my cast so I’ll make sure not to cross the line. My Plan B was to insert/use body doubles like what Lars Von Tiers did in his film Antichrist. I am imagining it as an art film not a “bastos” one but we have to consider that not all audiences will embrace that kind of view. I guess I was too ambitious at that time. So to put everything fair, we have to tone down the scenes. I was surprised when I knew that the film was still rated R-18. Two organizers from different film festivals (after SIFF and MFF) frankly told me that it’s impossible for them to program Ika-3 Putahi for now and it’s totally understandable. So I asked myself – “how much more if we followed the original plan?”

[Yadu Karu] Any interesting comments from the audience members during the film screening?

[Joe Bacus] I was flattered when some of my friends and some random people from the audience congratulated me saying they like our film. I can’t believe they were so interested how we did the whole film; lots of them were so curious.

[Yadu Karu] What did you learn from this project?

[Joe Bacus] I have learned a lot of things especially when it comes to technicalities. It was so hard wearing too many hats for this project. Sometimes it’s frustrating to pursue when nobody wants to get involve in your project. Maybe because they don’t believed in what we are doing. So I really have to spend more time in learning the cinematography and the editing. Then Orpheus do the preparations, script, props, etc. We don’t have any choice but to believe in ourselves when nobody does.

[Yadu Karu] If you are given a chance to change the ending, what would it be?

[Joe Bacus] There were a lot of great ideas coming from friends how the film should’ve done, such as non-linear narrative, twisted ending, etc. and I really appreciated it. I don’t know why but I like the way it ended. I just want to follow the protagonist point of view and don’t want to make it complicated, just plain and simple.

[Joe Bacus] A World War II film. I just want to share the stories of unsung heroes who fought for our freedom we enjoy today. That’s how I want to honor our forefathers. I have heard and read a lot of inspiring stories during the war that is worth filming for. I don’t know why most of the mainstream people are tireless of watching same old s*** every year.

[Yadu Karu] Any advice that you can give to those who want to make their own films?

[Joe Bacus] I just started filming too, so I don’t have that knowledge to share pa. But for first timers, just watch a lot of high rated movies and learn from the masters and study them. Shoot whatever you want with your cam and start filming with your 5-6 close friends (including 3 casts). Don’t invite more than that or hell is going to break loose ( hehehe). 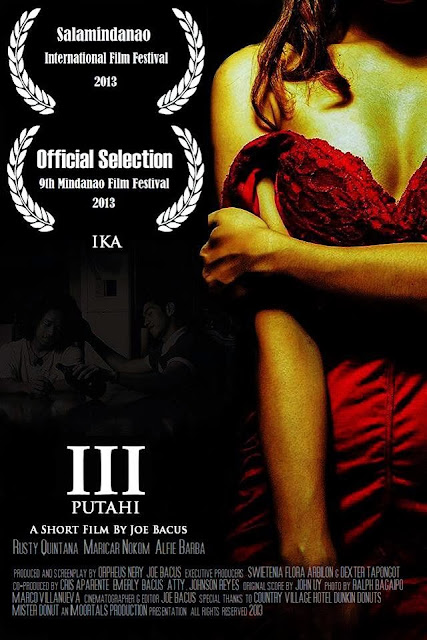 Synopsis
William is going to take everything from Emilio – but tonight, during another drinking session, he is Emilio’s best friend, best man at his and Helena’s upcoming wedding.

Joe is one of the delegates in the 6th Cinema Rehiyon this coming February 19-22, 2014 in Cagayan de Oro City.