Precy and her film’s lullaby

Precy M. Regalado is a woman who can do two things at the same time. When I first met her in the summer of 2013 (The 1st GenSan Summer Film Camp) I admired her for being sincere and passionate not only for being a teacher but also for being a filmmaker.

Maam Precy (as commonly called by her students) is a University Professor in Mindanao State University- General Santos City. She is in the College of Education and teaches the subjects - Methods of Research; Education Technology; Curriculum Development; Music and Arts for Teachers; MAPEH; Ed.102; Principles and Methods of Teaching; Teaching Profession and Ed 197- Practice Teaching. These subjects are taught in her 2nd and 3rd year class. Currently, she’s taking her Ph.D in Education at Notre Dame of Dadiangas University (NDDU) of GenSan. With these heavy loads I could say that she is a superhuman.

Despite the busy schedule, Precy still manage to shoot her first film entitled HELE NI LORNA (LORNA’S LULLABY). In an interview via Facebook, Precy shares her experience in shooting her first film and impart the lessons she have learned in filming it.

Yadu Karu: Precy, please tell something about yourself?

Yadu Karu: Is it hard to combine your profession as University Professor & filmmaking?

Yadu Karu: What motivates you to make or shoot a film?

Precy: [The media] and my students - because they are the first one making films under my instruction. I was challenged by their works, for I didn’t have my own to be proud of before. Then, until such time, I tried to make my own.

Yadu Karu: Is it harder to get started or to keep going? What was the particular thing that you had to conquer to do either?

Precy: Yeah! It’s really hard because I don’t have a formal schooling on this field. I have a limited background when it comes to filmmaking. But my desire to know better helps my development in this field. And I have to balance my time with my profession, my family and filmmaking.

Yadu Karu: What is the title of your film, what's your role and what is it about?

Precy: It’s HELE NI LORNA (Lorna’s Lullaby). I am the director of this film. It’s about postpartum blues of a mother.

Precy: It is based on true story. HELE NI LORNA inspires many mothers who undergone the same predicament with Lorna in the film. This tells people that there is hope in every bad situation that happens to every individual in this world, especially if it measures the love of a mother to her child.

Precy: A feeling of fulfillment.

Yadu Karu: Describe your state of mind when you saw your film in the cinema.

Precy: I’m so excited with a mixture of fear and doubts, asking myself if I can really make it! But along the way, I felt the acceptance of the audience, hearing them shouting, sometimes, silence and laughing in many scenes they have seen. That was also the first time when our Chancellor told me that my film can be compared to a professional one. I was so happy because I felt that he’s proud of my work.

Yadu Karu: Can you tell me the challenges that you and your crew encountered during the shooting of the film.

Precy: There were many challenges such as the preparation of all the things needed in the story and of course, the budget. But Thank God, we have a kind director in the person of Direk Teng Mangansakan with Moises “Musoy” Charles Hollite who always there to support us.

Yadu Karu: Describe the HELE NI LORNA in one word.

Yadu Karu: Most of your actors in HELE NI LORNA are your students and friends. How’s working with them?

Precy: They are all kind, creative and supportive, that’s why I did not find any idle moment working with them.

Yadu Karu: During the Q & A portion of the SalaMindanaw International Film Festival last November 2013, you said that your film talks about post-partum depression and partly based in your story. Is it hard to express it visually? Since it’s a personal story?

Precy: For me, I didn’t find any difficulty to express it visually because as what I have said before, it comes from a true story of my best friend and partly from my own story. It’s not hard to visualize on the things familiar to you.

Yadu Karu: What’s the usual advice that you have given to your students? Is that advice change when you made your first film?

Precy: I have been telling them that in making a film, they need to be creative, imaginative and most of all they must have patience and positive outlook that they can really make it. No, it didn’t change because based from my experienced I have proven that all instructions I’ve shared to them are true!

Yadu Karu: Any interesting comments from the audience members during the film screening?

Precy: I’ve heard them saying, it’s a beautiful film, amazing, the actors are good especially the lead actress Lorna my student and etc…

Yadu Karu: What was the most important lesson you had to learn that has had a positive effect on your film? How did that lesson happen?

Precy: I’ve learned that NOTHING IS IMPOSSIBLE if you commit everything to the Lord. He is always with me since I started dreaming this art. During the making of film, he provided me everything I need, family, mentor, actors, friends even the budget because it’s not easy to make a film especially if you don’t have budget. But Thanks to my God, many of our friends extended their help to make my film Hele ni Lorna a success!

Precy: My dream film project is to make a full length film of my life story about Gold mining. I know, you know that already Yads, because I already shared that during our film camp seminar.

Yadu Karu: What advice would you give to someone who wanted to have a life creating film?

Precy: My advice to those who wanted to make a life creating film is: Keep up! Keep going, whatever happens, reach your dream! Start making film from a familiar one and please, Don’t Give Up! Trust your God and hold on to His promise that whatever happens, He will never leave you!

Precy: With God’s will, this coming summer, I’ll start making my next project. Hopefully, I can also finish my schooling before this term ends so that I can concentrate making my dream film. 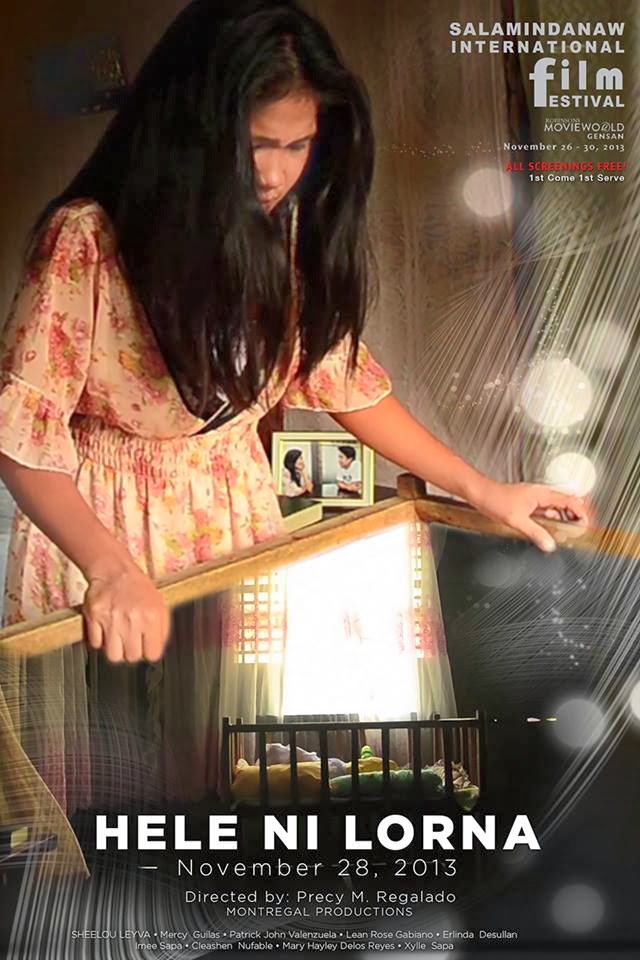 There’s no greater love on earth than that of a mother to her child. But sometimes in life, there are things that test the stability of a mother’s love. One morning, Lorna wakes up with a changed behavior, a seeming phantom engulfing her whole being, threatening to cut he bond between her and her child.

Precy is one of the delegates in the 6th Cinema Rehiyon this coming February 19-22, 2014 in Cagayan de Oro City.

Leave a comment below and let me know what you think.
Thank you.
Labels: Cinema Rehiyon film Indi film Mindanao short film