Experiencing the other side of GenSan’s Tuna Festival 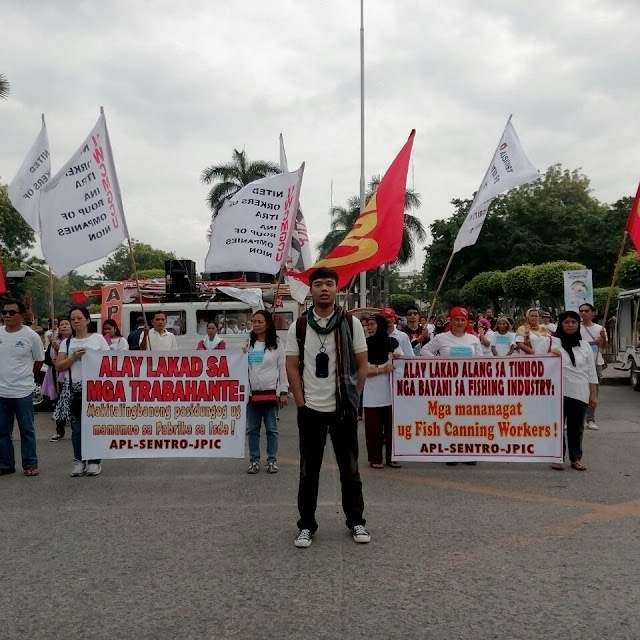 The 17th GenSan’s Tuna Festival held last September 1-6, 2015 was a successful event attended by local and foreign tourists. As usual, I did not participate in the said event because I have other commitments to attend to. Aside from it, I can’t stand the hypocrisy being manufactured by the apathetic (fishing) businessmen and mindless tourism advocates and some city officials. Why I said hypocrisy? Because they failed to include the fishing workers and they failed to tackle the issue of labor rights violation committed by fishing companies.

Instead of partying in their Tuna street party, I devoted my time for a meaningful activity. I joined the Alay Lakad activity of APL-SENTRO GenSan. It’s a simple event held last September 5, 2015. Its purpose was to honor the true heroes of fishing industry – the fishing workers. Different sectors in GenSan joined the activity such as Youth Labor Movement, Women Initiative and Empowerment, Citra Mina Union Workers, Passionist Center for Justice and Peace Integrity of Creation Inc., Malagat Urban Poor Association and the like.

Participating in this activity does not entail that I’m a leftist. It’s just that I supported the cause of the fishing workers of GenSan. This labor rights issue has been a long subject in the city. I know most of the Generals (the term for people in GenSan) are aware of this issue. I just cannot understand on why they keep acting dumb about it. The city has not paying attention to this issue so that it could not be notice in other countries. In the recent years the city somehow acknowledge the issue but in unassertive manner.

Tuna is one of the primary exports of the Philippines to other countries. One of its biggest markets is in the European Union (EU). Philippine producers are fortunate to export more than 6,000 products to any of the 28 member countries of the EU at zero tariff using the Generalized System of Preferences Plus (GSP+). “Products that may avail of the duty free access include coconut and marine products, processed fruit, prepared food, animal and vegetable fats and oils, textiles, garments, headwear, footwear, furniture, umbrellas, and chemicals. The Philippines, currently the only country in ASEAN to be accepted in the scheme, applied for the scheme last year and was accepted formally into the EU-GSP+ on December 19, 2014.”

According to the Department of Trade and Industry (DTI), “the GSP+ is a special incentive trade arrangement for the Implementation of 27 international conventions on labor and human rights, environmental protection and good governance. This comes in the form of zero duties and offers a more generous scheme of preferences compared to the regular GSP. It has a larger coverage of 6,274 products, compared to the 6,209 products under the regular GSP, of which, only 2,442 are subject to zero duty while 3,767 have reduced tariffs.”

According to the study of DTI, Philippine exports under GSP+ will increase by €611.8M during the first three years of availing it. “The projected increase in exports will translate to more than 200,000 new jobs generated in both the agriculture and manufacturing sectors. Many of these new jobs will be created in the rural areas.”

Citra Mina is the country’s second largest seafood exporter. However, behind its success is a grim reality of precarious work and systematic violations of labor standards, including safety and health standards. When workers decided to reclaim their rights by establishing their union, the company reacted by sacking the workers to bust the union. Most of the workers assert their right and fight for fair treatment.

There are 9 issues raised: 1. Violation of Labor Standard; 2. Neglect on Occupational Safety and Health Standard; 3. Labor-Only Contracting through “cabo” system; 4. Series of Unfair Mass Dismissal involving 238 regular workers who were identified and/or suspected as union members; 5. Non-recognition of workers’ legitimate union and filing of legal case to cancel union registration at the Department of Labor and Employment; 6. Unfair Labor Practice and Union Avoidance Scheme by disowning its employer status towards its regular workers; 7. Unfair Lock out and Unfair Declaration of Bankruptcy; 8. Unfair immediate dismissal and unjust; 9. Bargaining in Bad Faith and Denial of the Union’s right to bargain collectively. The Citra Mina workers demand that (1) Union Recognition and Reinstatement of all unfairly dismissed employees (104 workers) with full back wages; and (2) Regularization of 43 Repatriated Citra Mina Fishermen who were abandoned by the management when they were detained in Indonesia for almost 6 months.

The title of GenSan as the “Tuna Capital of the Philippines” is overrated. We brag so much about it not realizing the gruesome condition of the workers in canning factories and the high risk job of the fishermen in the high seas.

Why the International Labor community supported their cause if the workers are lying. If the APL-SENTRO GenSan did not help the Citra Mina Workers maybe they would be forgotten and other violations would occur. Even the Department of Labor (DOLE) cannot fully help their labor problems because Citra Mina Company “allegedly conspired with the agency”. Whatever the reasons, the Citra Mina workers are thankful because their voices are heard not only in the local and national scope but also in the international scene.

Karma is a bitch. It has a way to punish those who feel and act like a god. It’s fortunate that the Europeans are conscious on what they eat. They are not only conscious of the process on how to make it but they also concern of the workers behind it. With this case I hope that we should learn from it. I hope that as consumers we should be conscious of this issue because it entails if we care not only to our environment but also to our fellow human being.

Blogger's note: I am open to listen to the side of the fishing company about this issue. I hope they are willing to share their side about it.

Leave a comment below and let me know what you think.
Thank you
Labels: event Festival Gensan Tuna Festival Union Workers