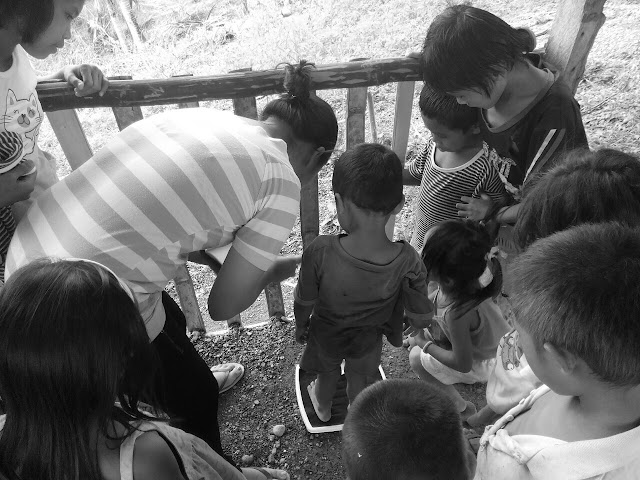 Despite her busy schedule, Kenneth Jane Omongos never fails to extend her advocacy work in far flung communities of Alabel Sarangani Province. She is one of the few advocates in Sarangani who have genuine heart to help other people.

To help me explore the municipality of Alabel, she invited me to witness their activity last Sunday (July 31, 2016). I became an observer not only for their Sunday activity in Purok Mangga, Brgy. Bagacay, but also the overt vices in Purok 1 of barangay Spring. I became a witness to problems that are evident in the two communities.

As I have expected, Purok Mangga is situated in a mountainous area of Alabel. We had a rough motorcycle ride with his father (who happens to be the Pastor in Purok Mangga) going to the community. In the first phase of our journey, we passed through a dead river.

(When it rains and floods, where would the route for students if they are going to school? Is there an alternative way?)

"Wala, mao ra gyud ni ang agianan," said Pastor Omongos. (None, this is the only way.)

As I tried to absorb the statement of Pastor Omongos, I imagined the scenario where flash floods would rush in our way. The dead river is the only way to school or even a way out from their community.

When we arrived in the community, I got amazed when Blaan kids greeted us with a mano. It was my first time to experience such welcome.

"Friend, dugay nako wa ka du-aw sa mga bata diri sa community," said Kenneth. "Busy man gud sa Law School ug sa work." (It has been a while since I visited this community. Because I am busy with law School and my job.)

It is a typical Blaan community in a remote area. Their houses are made of wood; some have decent roof like while others prefer the traditional one. Their water source come from a tubod (water sprout); as I have observed, they need to have a decent water system in order for them to fully maximize the usage of it. But what like about the area is that you can see Sarangani Bay if you are in the community.

As soon as we arrived in their makeshift chapel, she immediately took out her borrowed weighing scale. She checked the weight of the Blaan kids with gusto. After that, she introduced me to them. They were all curious about the new guy in their community.

Kenneth and I laughed. The two young mothers at the back made weak laughed. She started to introduce me to quench their curiosity.

Kenneth started the storytelling session with the Blaan kids. She told the story of the Good Samaritan and emphasized its morals. As I became a passive listener, I got carried away when Kenneth asked:

Although it was not shocking to me to heard their responses, I was a bit surprise that all of them responded. Kenneth shared words of encouragement to help boost their confidence. She knows what it feels to be bullied because she herself experience it. She emphasized the value of forgiveness and understanding in a Judeo-Christian context. But as with its psychological damage, I am not sure if her advices are effective to them.

To cool down the scene, we decided to play our own version of soccer. In my case, it was fun. It was fun in the sense that I'm not into sports and the energy of my teammates was contagious. Although in the past years I have been to many Blaan communities in Sarangani, I never got the interest to join in such activities. But I gave it a chance for an experience. It was my first time to be part of a team. Because of our determination, we won the game against Kenneth and her team.

The game made us hungry. We ate Binignit which its main ingredient was Manna Pack (special rice that has tidbits of vegetables and meat). It tasted like champorado but with a binignit twist. I pretended that I liked it. Thanks to the children because they saved me from not finishing it up.

"Pa, kaya pa mubyahe?", Kenneth asked to her father. (Pa, are you still ok for another trip?)

That Sunday activity gave me a glimpse of a picture that most of us would avoid to see.

Leave a comment below and let me know what you think.
Thank you
Labels: advocacy Alabel B'laan Indigenous People Mindanao People Sarangani youth