Caught in the Middle 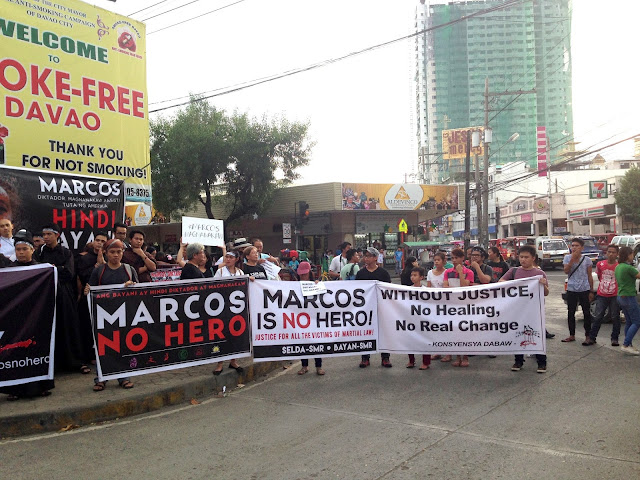 note: This was first published in Sun Star Davao (Dagmay section) on January 15, 2017. This is also published in dagmay.kom.ph (photo by Jhoanna Lynn Cruz-Daliling)

Whenever we talk about Marcos in the family, I do not hear stories of disgust or condemnation especially from my mother and father. Because of this, I grew up neither hating nor loving Ferdinand Marcos.

My father had a firsthand experience of the war in Mindanao during Martial Law in the late 70s and early 80s. His family was one of the bakwit, evacuees who transferred from one place to another to avoid armed conflict. Their community in Kiamba, Sarangani Province (back then Sarangani had not yet been declared a separate province of South Cotabato) became one of the war zones in the SOCSKSARGEN region. Thousands of families were displaced and many young Muslims joined the fighting. Because he could not anymore tolerate the injustices they had experienced in the hands of the Ilaga, the Christian paramilitary group tasked to purge Mindanao of Muslims, my father enlisted in the Black Shirt movement. By joining the Muslim militia, he helped avenge his fellow Moro brothers and sisters who had been killed by the Ilaga and the military.

As my father shared this war story, I was waiting for him to blame Pres. Marcos for it. But he put more emphasis on the effects of intense militarization and the chaos it brought to their lives. I wondered what their leaders had indoctrinated in them that their view of the war seemed only on the surface.

This sentiment is similar to what I heard when we interviewed Moros who had been victims of Martial Law. The Transitional Justice and Reconciliation Commission (TJRC) assigned our group to make a documentary film on Moro issues. We visited various places in Mindanao to interview Moros and Lumad who experienced marginalization through land dispossession, historical injustices, and human rights violations. In one of our interviews, we visited Malisbong in Palimbang, Sultan Kudarat, which was one of the greatly affected places during Martial Law, and talked to the survivors of what is known as the Malisbong massacre.

As the survivors recalled, soldiers and officers of the 15th and 19th Infantry Battalion of the Philippine military carried out search-and-destroy missions around the coastal villages in Palimbang. The thundering sound and explosion of bombs and cannons overwhelmed the community, destroying public and private properties.

The military separated the men, women, and children. Most of the men were sent to the Tacbil mosque. The military shot most of the men inside the mosque; their blood splattered on the white walls. Their bodies were then dumped into a mass grave near the mosque. On the other hand, the women and children were forced to board the naval boats that were left afloat in the sea. They were under the scorching sun for days without food and water.

The military raped most of the women in the area. Children died not only because of bullets but also because of starvation. Dead bodies were scattered everywhere, rotting. Many were killed, but some were lucky to escape to the mountains, hiding until the attack was over.

When I listened to their stories, I felt like my heart would collapse. But just like in the case of my father, no one mentioned Marcos.

My mother, on the other hand, always says, “May pa tong panahon ni Marcos kay barato ang mga panaliton. Okay tong pagpadagan niya sa Pilipinas.” I want to ask her many questions, about why she thought that the time of Marcos was better than the present, but my mother is not into explaining things. She always says commodities were cheaper then whenever she sees news about Marcos. I do not blame her for being like that. Based on the stories she shared to me, she did not have any bad experiences during the Marcos regime. Or maybe she did not care about what had happened to other people.

Just like my mother, there are people who did not experience the horrors of Martial Law. Some Filipinos even laud it for being the “best years” of the country. When I hear this narrative, I get flabbergasted that Ferdinand Marcos has this god-like persona because of his purported contributions to the country. On the other hand, I am also hesitant to fully accept the narrative because it reads like an exaggerated storyline.

This led me to read up on historical facts and narratives about Martial Law. I read cases of abduction, human rights abuses, and killings, as well as the vanity of Imelda Marcos and their unimaginable ill-gotten wealth. I also watched documentary films and talked to other survivors. The more I immersed myself in this matter, the more I got curious about what really happened that time. I became more interested not only in what was happening on stage, but also in what was going on backstage.

I am in the middle about their condemnation and adoration of Marcos and his family. I sympathize with the anti-Marcos and the Martial Law survivors. Their stories are powerful reminders that we should choose the right leader to lead our country. On the other hand, the idolatry of the pro-Marcos block also amazes me. It needs to be studied and not damned.

The subject of Martial Law and its atrocities, I think, had not been actively in the consciousness of majority of the Filipinos until President Rodrigo Duterte included it in his pronouncements. In one of his speeches, he threatened to declare Martial Law if his critics continued to condemn his war on drugs. Then, his decision to allow the burial of Ferdinand E. Marcos in the Libingan ng mga Bayani (LNMB) also sparked controversy. Human rights advocates as well the survivors of Martial Law opposed the idea by taking to the streets in protest. But in an unfortunate twist of events, the burial happened surreptitiously soon after the Supreme Court ruled in favor of it.

The infamous president is now buried in hallowed ground. It happened on November 18, 2016. It was a nasty surprise for the anti-Marcos block and the Filipinos in general because the law provides for a period of fifteen days for any group to file a motion for reconsideration.

The pro-Marcos block was overjoyed while the anti-Marcos block felt that they were stabbed in the back. And for those in the middle, we could feel the pressure of choosing which side to be with. As expected, it created more division than unification. And worse, it caused cognitive dissonance because of a clash of beliefs and principles within oneself and within one’s perceived communities. With the proliferation of fake news and all sorts of pseudo-experts, one cannot help but get caught in the middle in this war of truths. Whether online or offline, the war continues and keeps evolving.

But the survivors, as well as the families of the victims of this horrific period in Philippine history, are still yearning for justice. And I think the Moro victims especially still continue to live as if that moment was only a hideous dream.