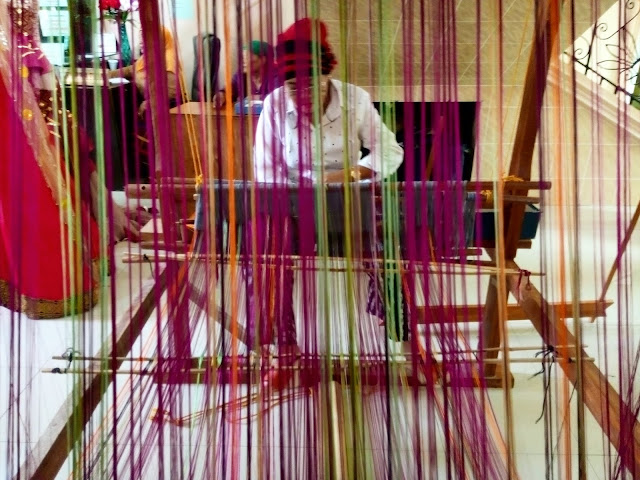 I did not immediately say yes to the invitation of Nanardz Navarro to join him in the 1st Inaul Festival of Buluan in Maguindanao province. But later on I realized that I needed to be there to reconnect with my Maguindanaon roots.
The Provincial Government of Maguindanao in partnership with the Department of Tourism of Autonomous Region in Muslim Mindanao (DOT-ARMM) organized the 1st Inaul Festival in the municipality of Buluan, Maguinadanao, which held on February 9-14, 2017. With its theme - "Weaving the diverse Cultures for unified Maguindanao," it's a week-long celebration showcasing the beautiful textile of the Maguindanaon. The event also highlights the preservation and promotion of Maguindanaon's culture, traditions and practices. The Inaul Festival was formerly called Sagayan Festival. But Lanao Del Sur is the first one to celebrate it. That is why the provincial government of Maguindanao decided to change it to avoid duplication and confusion. The province of Maguindanao and DOT-ARMM hope that the Inaul Industry would boost economic development and tourism in the province.
“We want to change the negative perception about ARMM,” Bai Ayesha Vanessa Hajar M. Dilangalen said, the DOT-ARMM Secretary. “Through Inaul, we could invite many tourists as well as investors in the province. We would like to promote it not only as malong but as a Maguindanaon textile. We would like to sustain the weaving industry to give livelihood particularly to women.”
"Inaul, a Maguindanaon word that literally means ‘weaved’, is a unique fabric manually and meticulously woven mostly by Maguindanaon women weavers in Mindanao." Today, the Inaul is no longer confined to malong and other traditional garments. Inaul has many by-products like gowns worn by Miss Universe candidates during the Mindanao Tapestry Show in Davao City held last January.
I admit that I am not an expert in Maguindanaon culture or the Moro culture in general. Lately, I developed an interest in knowing many cultures from different tribes in Mindanao. That is why I travel often to different communities particularly in the SOCCSKSARGEN region, to have community immersions. As a writer and visual storyteller, it helps me discover many interesting stories that are worthy to be shared. But most importantly, it helps me rediscover myself as a Moro living in Mindanao.
When we arrived in Buluan, I did not feel any sense of nervousness since I am familiar with the place and its culture. Unlike those who have not been to Buluan, they would imagine it as a place of chaos as what the mainstream media portrayed it. It is more of nostalgia and a feeling of excitement, that I could witness some of our traditional practices.
I feel delighted to see many women wearing their malong during the festival parade. I remember my paternal grandmother who liked to wear her malong with pride whenever she would go to Dadiangas (GenSan). I am also amazed by the many Maguindanaon delicacies (like dudol and kumukunsi) served to us. These delicacies are only served on special occasions like kanduli. It is also entertaining and astonishing to witness Dayunday, the Maguindanaon’s version of harana, because the two men sing impromptu songs to flatter the lady. Nowadays, it is rare to witness that kind of performance.
Aside from the activities on the event, I am also interested in Buluan’s stories. For example, I got curious about the story of a cruel Datu who became a crocodile in Lake Buluan. Maguinadanaon myths and legends are interesting stories to the point that some people believed it to be true. Furthermore, I am also interested in the contemporary stories that people loved to talk about, as well as stories that people would shun to share. My three day stay on Buluan is not enough to know all of these stories.
The Inaul Festival is not merely a photo opportunity for me to brag about it on social media. The event serves as a reminder that I should love and promote more about Maguindanaon culture. But first, I should know the story of my Maguindanaon family lineage. How could I promote Maguindanaon culture if I do not know the story of my family? It is a must, for a Moro like me, to know the history of my family.
For the people of Buluan and DOT-ARMM, it is a big challenge to sustain this kind of event. It is a shift of mindset for the people of Buluan or the people in ARMM in general. But with the right planning and consultation, the Inaul festival would be one of the sought after events in the country. It needs time to bloom and prosper.
Labels: ARMM BANGSAMORO culture Department of Tourism event Festival interview Maguindanao Mindanao People Tourism