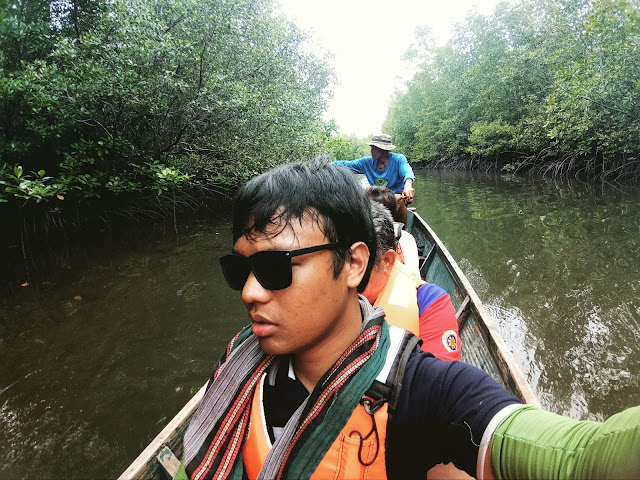 It is a refreshing scene to witness the lush mangrove forest of Barangay Taguisa in Lebak, Sultan Kudarat. This mangrove forest transports you to other countries, as if you are in the Mekong Delta of Vietnam or in the rivers of the Amazon jungle. The Lebak Katunggan Coastal Eco Park is Lebak’s new eco-tourism attraction. The eco-park has 320 hectares of old-grown mangrove forest, with 26 different species. It is part of the 720 hectares of mangroves that cover the four barangays (Datu Karun, Taguisa, Tran, and Kinadala) of Lebak.

On August 15, 2017, the said eco-tourism site had its soft launching. Some municipal and barangay officials, along with the Department of Tourism (DOT) 12, and some guests were present during the event. It is expected that this new eco-tourism site will spur economic activity in the area, helping generate additional income for the residents of Barangay Taguisa.

In the 80s, mangroves blanketed all of the coastal barangays of Lebak. It was reduced because of unsustainable practices of some locals (like kaingin) and they would sell pieces of mangroves as far as Zamboanga. The wood from the mangroves are good materials for housing and charcoal making.

Lebak has also experienced storm surge in the 90s and the mangroves helped lessen its impact. But most of the mangroves had been damaged. That’s why the Municipal Environment and Natural Resources (MENRO) Office and the local government initiated a monthly mangrove planting activity to rehabilitate the area. Up until now, they still conduct it with the help of the community.

Just like any other eco-tourism sites in the country, environmental threats are inevitable. The eco-park is not exempted to some locals who would like to cut down the mangroves for their selfish motives. Worst, some of the locals still practice dynamite fishing. It is an open-secret activity, as one resident said, but nothing could stop them in doing such unsustainable practices.

“Ginakaingin nila, Sir,” said Batuy. “Tagapikas barangay na sila. Mao ga roaming mi once a week arong mabantayan jud namo ang mga mangroves.” (They do kaingin, Sir. They are from the other barangay. So, we need to patrol once a week to protect the mangroves.)

“Bahala'g walay bayad basta makatabang ko sa mga bisita sa mangrove na gusto mahibaw-an ang importansiya niini sa katawhan og sa kalibutan,” Batuy added. (It's fine that I don't get paid as long as I can help visitors who are interested to know the importance of the mangroves to people and the world.)

Batuy and other tanods still continue to protect the mangroves in their community in spite of the meagre support they get from the local government. They only get a P 1,000 monthly salary and sometimes they get threats from those locals who would like to cut down the mangroves.

“Kung mawala na ang mga mangroves, mag-unsa na lang mi? Dili na makita sa among mga anak ug apo ang kanindot sa among lugar,” said Batuy. (If the mangroves would be gone, what would we do? Our children and grandchildren wouldn't be able to see how beautiful our place is.)

“Wala ba ni sila gibigla?” I asked myself while walking on the bamboo boardwalk. “Are they ready for this opportunity?” (Aren't they shocked?)

The area has so much potential. But they should be prepared with eco-tourism and environmental protection programs. The environmental threats will prevail if they would not unite against those who would like to destroy their place. I want to see their local chief executive have a strong stand against it with the support of the members of the Sangguniang Bayan through creating policies that will protect their environment. This really needs a concerted effort from the Mayor down to the community members. This also needs a collaborative effort among the local government, the community, environmental groups, and the tourism sector. I would like to see them get empowered. The community must learn how to stand firm in protecting their place.

I do not usually share my doubts and concerns about the place especially if I do not immerse in the community. I do not want to jump into conclusion without really asking the locals about their place. And besides, they just had their soft launching. I don’t want to spoil the moment.