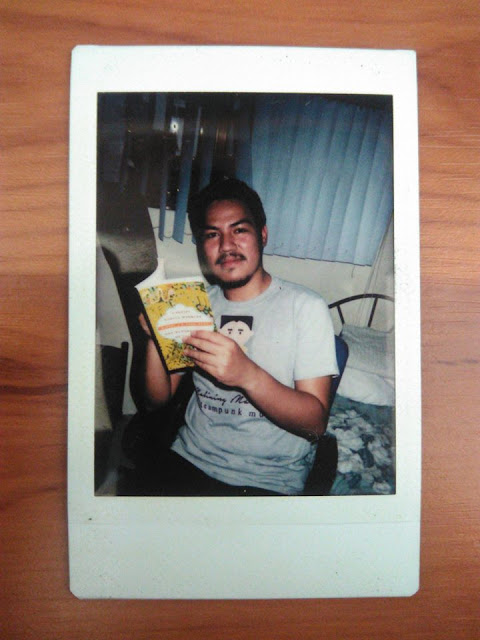 I was excited to congratulate Jade after hearing the news that he won in the 67th Carlos Palanca Memorial Awards* for Literature. His winning piece, A Portrait of a Young Man as a Banak, is 3rd Prize in the Essay Category.

I am a “secret fan” of his writings – a thing I do not admit whenever we bump into each other during literary events in the region. He is also a philosopher in-the-making, writing about his personal experiences to reveal truths about life.

For this blog, he talks about his winning piece, his writing process, and how reading is helpful to writers.

Yadu Karu: What was the first thing that came to your mind after knowing that you won in the Palanca Awards?

Jade Mark Capiñares: Am I allowed to say expletives here? Let’s just say that a non-conservative word starting with the letter F immediately came to mind when I read the email saying I had won 3rd prize in the essay category of this year’s Palanca Awards. And indeed that F word was the first word I uttered—a kneejerk reaction of course, because I was in the office surrounded by my officemates, who was equally shocked when they heard me curse and freak out. My reaction, however, was more a product of disbelief than of exasperation: although I’d hoped to win this year, I’d never, to avoid great disappointment, really had high expectations. I checked the email twice, thrice, bearing in mind that this is the era of fake news, and later finally verified that it was authentic. “I won the Palanca!” was all I could shout moments later, teary-eyed, and went out of the office to call and thank my closest writer friends, especially those who had encouraged me to join this year’s Palanca Awards. In times of victory, all you can think of is to be grateful.

YK: What’s your inspiration behind your winning piece?

JMC: Not that I think that I’m the only one who could do it, but I always have this feeling that I have the responsibility to write about the place where I grew up. What you will see, if you visit the place now, is a seaport: cold cement, stacks of container vans, etc. I want to tell other people that at some point of history, before it was demolished, people, despite the hard and unusual living condition, thrived there. We had the wooden bridges, our wooden stilt houses, the sea, and everything the sea could offer. Until now I still feel a profound connection with the sea.

My essay is also a homage to James Joyce. The title of my essay is actually based on Joyce’s A Portrait of the Artist as a Young Man. In fact an entire paragraph in the middle of my essay is a pastiche of the said novel’s introductory paragraph. Joyce wrote about Dublin, his birthplace, when he was far away from it. Maybe we really need distance to measure how much a place, a thing, or a person means to us. My essay is an attempt to metaphysically reconstruct and grasp my physically demolished and distant childhood place.

Another inspiration, the greatest perhaps, is my family.

JMC: When I want to write something, I let it linger—gestate is a better word—in my mind for a long time. During that period, every time something that relates to my writing project comes up, I make a mental note of it. I hate to take down notes (on a piece of paper, for instance) because more often than not I lose them (I’m not that organized, which I guess sometimes shows up in the fragmentary nature of my writings). Unless I shoot my brains out, which I won’t, my mental notes will stay there for my digging up later. Included in this process is the conceptualization of the form and the general direction of my writing project. In my mind the mental notes are like photographs being developed in a dark room, and when I start writing, I pick them one by one, putting them in their right places. I approach my writing, then, very much like making a collage. And when I finally have the confidence to write, when I finally have an idea of what my essay looks like (I say “looks like” because for me an essay is also visual), I just sit down in front of my computer (I prefer typing) and only stand up when I finally typed the last word.

Apart from my “serious” writing projects, I also write regularly, preferably every day. A paragraph or two will do. Most of these casual writings appear on my Facebook wall. I don’t care if they don’t mean anything: they must not mean, to follow MacLeish, but be. I don’t care if they don’t have any literary merit, because for me they are the firewood I gather for my writing bonfire. When the coldness of life comes, they are always there to give me warmth.

YK: When did you realize that you wanted to write?

JMC: I realized that I wanted to write when I was in my third year in BS Accountancy. For all my life before that, I had thought that I’d settle with numbers. Not to brag, if there was a subject I was best at in my elementary and high school years, it was mathematics. Maybe what I liked about math (elementary and high school math, at least) was the degree of certainty it demanded: 4 plus 4 was always 8, the square root of 25 was always 5, and the area of a rectangle was always the product of its length and width. You could not say, “The value of pi is an elephant,” because it was always 3.14, and of course saying that was silly. There was always one right answer.

But life, I found out much later, was all about uncertainties. For one, just when I thought I was going to pass a major subject, I failed. Just when I thought I was going to be a CPA someday, I shifted to AB English. And I was only able to accept the overwhelming uncertainty of life when I discovered my love for words and literature. A word in itself is uncertain and may mean different things in different contexts; linguistics tells us that a word is even arbitrary. But paradoxically it is this very uncertainty that makes language convey meaning: it is through language, despite its contradictions, that we utter what we think, what we feel, and what we desire. Language gives us nuance. A poem is meaningful when it is suggestive; a short story, personally, is excellent when it is ambiguous and when the reader has to think about its meaning. For me an essay, which traditionally must be logically structured, is best when it seems to meander and teeter on the brink of insight. This very uncertainty, finally, makes us see that there are several ways of living. There is no one right answer.

I write because I am uncertain.

YK: As the new interim chairperson of Pangandungan, what are your upcoming plans for the literary scene in GenSan?

JMC: It has only been a year since we started. And all we have achieved would have been impossible had it not been for the few people that started it all. I’d like to take this opportunity to thank all of them, the members of Pangandungan and all the writing groups in the region, for I know that it has been difficult for them to put up with my moments of irresponsibility. That’s why, I admit, that being the chairperson of the group right now scares me. I’d like to continue what we have started, of course: to organize more literary events in the city, among others. I’d also like to process the registration of the group and other legal matters, so that it would be easy for us to connect our programs with the local government unit. To reassure myself, I tell myself that I’m not doing all this alone. I have the best people I can work with. And that somehow diminishes the pressure I feel.

YK: As a young writer, you have accomplished so much. How can you encourage other young/emerging writers (especially in SOX) to continue writing?

JMC: I don’t want to say that I have accomplished so much. Still I think that I have a lot to learn. And I’m saying this with the acknowledgment that it is such a clichéd thing to say and that it might come off as false humility. But it’s the only thing I could think of right now: to stay grounded, to keep learning. To go on with my pseudo-humility, I also want to say that I’ve just been very lucky that I’ve met the right people and gone to the right places. It was as if, even before I decided to shift to a different course, they’d been waiting for me. They were there when I struggled. They were there when I rejoiced.

Giving advice to young writers makes me feel uncomfortable. (It makes me feel old too. I want to emphasize that I just look older than my actual age, 22, and that looks can be deceiving.) I’m just like them in many ways, eager to write. But let me say that there’s nothing the world can do if the encouragement of a writer does not come within himself/herself. Awards, or any form of recognition, are only external motivations: does that mean that if there were no award-giving institutions, you wouldn’t write too? A writer must find what he or she is writing for. I don’t want to say something inspirational. I just want to say that I have found my own inspirations.

This has also been said a lot before and even said better by other writers: read.

JMC: It comes from Donald Barthelme, one of my favorite writers: "Never begin a story with a description of the weather." True, most Japanese novels would never be the same if they didn’t include the weather, the snow mostly, because they provide physical as well as emotional landscapes. I believe Barthelme knew this and that what he really wanted to say was more than a stylistic choice. I’d like to think that what he wanted to say was that we should never look outside when we start doing everything we do. Start from within. Start with what matters most to you: your fears, your worries, your uncertainties. No matter what you feel, the clouds will remain up there. The rain won’t care about you anyway: it will suddenly fall one seemingly fine day, especially when you have forgotten to bring your umbrella. It may be cold, but there’s a fire burning inside you. Find it.

YK: After winning the Palanca, what’s next?

JMC: I want to be more realistic: write more. And maybe buy an umbrella.

*"Named after businessman and philanthropist Don Carlos Palanca, Sr., the Palanca Awards continuously seeks to cultivate Philippine Literature by rewarding writers. It also serves as a treasury of these Philippine literary gems. It is considered the gold standard in writing excellence, coveted by Filipino writers, young and old alike."