Passing Down of Wisdom: Maria Todi's thoughts on Tboli culture 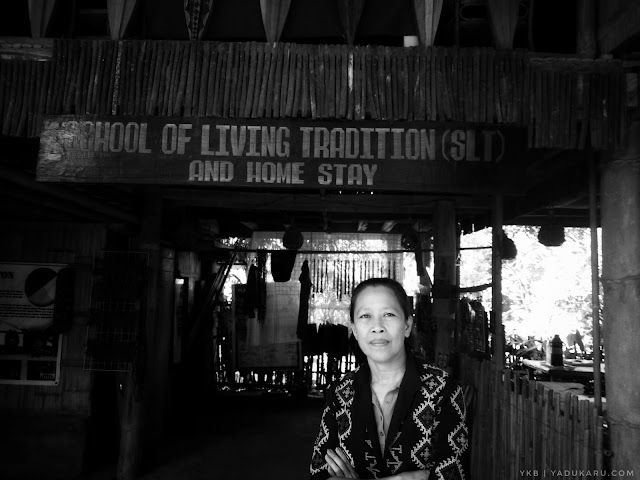 The toll of modernity on the lives of the people of Lake Sebu, South Cotabato, is one of the big challenges faced today, not only by the ordinary Tboli, but also by cultural workers like Maria “Oyog” Todi. According to her, young people now have a hard time balancing traditional practices and modern influences. For her, teaching the young generation traditional knowledge or wisdom is the true legacy. “It is important to pass down not only the material things but also the intangible ones,” she emphasized.

“A lot of young people today forget their values,” she said. She is concerned how technology, particularly the social media, influences the mind of the Tboli youth. As she has observed in her own Facebook Newsfeed, some Tboli youth spread gossips, rant against their enemies, and post other negative posts. “We have to teach our young people good values, especially the value of pakikipagkapuwa-tao.”

She also encourages all ethno-linguistic groups in the region to respect one another and avoid comparison. “We have our unique, individual identities. We don’t have to hate or destroy other groups. We should focus on our strengths and develop our skills and talents. We are all unique. And we must nurture our culture to avoid cultural extinction.”

During her childhood, Oyog got interested in their culture. She loved to listen to Tboli elders and observe how they managed their community. This interest intensified when she became a student at Sta. Cruz Mission School Inc. The school imparted to them that while they adapt to modern practices, they must not forget their roots.

“The best thing about being a cultural advocate for the tribe is that you always collaborate with like-minded individuals. As an advocate, you have the responsibility of sharing your knowledge to other people, in order for them to get empowered.”

Oyog does not dwell on negative things. Instead, she focuses her energy on solving issues within the community. She finds ways to get funds from private donors, agencies, or other creative ways. “If a door closes, God opens another door,” she said.

Oyog wants her fellow Tboli to be independent and resourceful. She wants them to use their skills properly and learn how to be entrepreneurial. She wants to inculcate the concept of sustainability to the Tboli. “We want to help them help themselves,” she said. “Not all the time that there will be financial assistance from donors.”

In 1997, the National Commission for Culture and the Arts-Committee on Southern Cultural Communities and Traditional Arts (NCCA-CSCCTA) organized representatives from different cultural communities in Mindanao. She was the first Tboli cluster head along with other fifteen IP leaders/elders from other cultural communities in the country. Lake Sebu’s School of Living Tradition (SLT) was established along with the Talaandig’s in Bukidnon. Lake Sebu’s SLT was constructed out of support from private donors and volunteers.

SLT offers many programs and services not only for the Tboli but also to those who want to learn more about their culture. They offer Research and Documentation; Education and Training (non-formal); Arts and Crafts Development and Marketing; Theatre and Performing Arts; Smanda (Tboli pawn shop); and Sponsorship Program.

“There’s a need to document the Tboli’s indigenous knowledge,” Oyog said. “Although there are a lot of researchers who have been visiting the municipalities of Lake Sebu or Tboli, it is also ideal if there’s a researcher from within the tribe. We need Tboli writers who can document our traditional practices. It is important that our young generation could read these documents. I hope the LGUs or any institution could help fund for this research and documentation.”

She hopes that the research data gathered from Lake Sebu and Tboli as well as in Kiamba and Maitum in Sarangani Province will be consolidated. Through this initiative, the Tboli of the region will be united.

When Oyog was taking her master’s degree at Notre Dame of Marbel University (NDMU), she has a study about “Tboli Beliefs and Practices with regard to Agricultural Practices.” She was not able to finish it because she got sick that time. She plans to continue it and get published.

“Let the tourists come and visit a cultural village and experience Tboli culture,” she said, emphasizing the importance of cultural immersion rather than watching her fellow Tboli performed in resorts around the lake. “I dislike seeing them do that in resorts. Let the tourists come, like in our SLT, and experience our culture. But the performers or artists decide for themselves. I cannot dictate what’s good for them.”

She admits that the LGU of Lake Sebu does not go deeper into their culture. She understands the local officials since they focus on local governance. She collaborates with them with regard to cultural work and recommends policies that could help protect the Tboli people.

Their SLT has been featured in numerous media outlets like the Lonely Planet and the Mabuhay Magazine, as photographed by George Tapan. Oyog also became the consultant of Ida Del Mundo’s debut film, K’na, The Dreamweaver.

She is happy that her family appreciates her efforts as a cultural worker. They have high respect to Oyog and her chosen path. “You cannot represent the tribe if you do not know the culture,” she said.