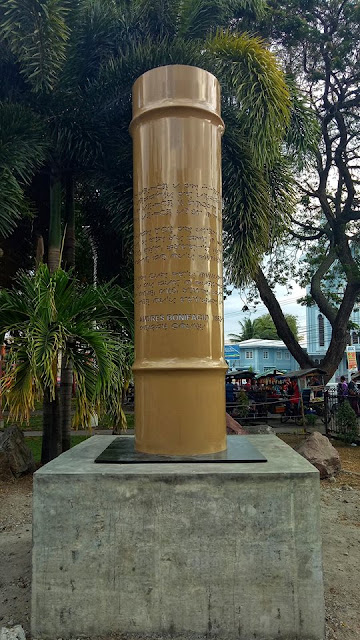 The 13th Bantayog-Wika in the Philippines was inaugurated in General Santos City on Wednesday (February 27, 2019) to honor Blaan language.

The launching was made possible by the Komisyon sa Wikang Filipino (KWF), in cooperation with the Local Government of General Santos City, Kalimudan Culture and Arts Center, and Mindanao State University-GenSan (MSU).

The Bantayog-Wika, which was made by famous sculptor Luis “Junyee” Jr., together with the Office of Sen. Loren Legarda, is a project of KWF which aims to preserve and enrich the indigenous languages of the Philippines through building language markers which mirrors the treasure brought by the languages.

The bamboo-shaped bantayog was made from stainless steel and stood 10-foot tall. Engraved on its body is the baybayin version of “Pag-ibig sa Tinubuang Bayan” by Andres Bonifacio. At night, visitors will see the text illuminated from where it stood.

“In accordance with the UNESCO declaration for 2019 as the Year of the Indigenous Languages, Bantayog-Wika is one of KWF’s projects which continuously support and recognizes the indigenous languages of our country,” said Chairperson Almario.

Fulong Cawayan said that establishment of the monument is a huge development for their tribe, which has long been struggling to preserve its culture and traditions. He said it will serve as a reminder to members of their tribe, especially the younger generations, of their unique language and identity.

“We’re very happy and excited for this recognition and being given importance by the national government,” he said.

The Blaan language came from the center and south of Mindanao, and is currently being used by almost 450,00 people living in the mountain ranges of North Cotabato and South Cotabato, Sultan Kudarat, Davao del Sur and Davao Occidental, and Sarangani. They also live around Buluan Lake, and along the shores of Davao.

The Komisyon sa Wikang Filipino was established in pursuant to Republic Act No. 7104 to promote research, development, and preservation of the Filipino language and other indigenous languages of the Philippines.
Labels: Blaan culture Gensan news