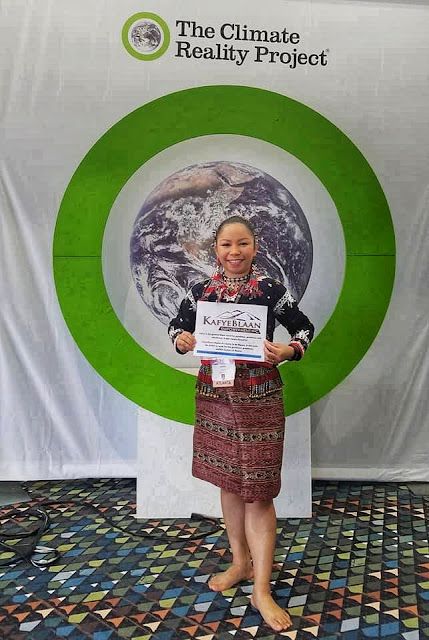 Josephine “Arjho” Latimban Cariño Turner dreamed to participate on Climate Reality Project. She did not expect that her advocacy work for the Blaans would lead to the realization of her dream.

“It is my dream to be in this Climate Reality Project Leadership Corps Training. When Manobo Princess Limpayen Sibug-Las shared to me about it, I went online and applied to be a participant. My application was reviewed, and I got accepted,” Arjho said.

Arjho’s dreams are driven by her passion to learn, to engage with other people who are also passionate about their advocacies. She uses social media to help those who need technical assistance.

Arjho only saw and heard the former U.S. Vice President Al Gore and his Climate Change advocacy on major news outlets and social media. “Back then, I was only dreaming and wishing to be in an event where I can just listen and learn more about climate change,” Arjho recalled.

Al Gore’s Climate Reality Project is a non-profit organization involved in education and advocacy related to climate change. It aims to catalyze a global solution to the climate crisis by making urgent action a necessity across every level of society.

“Coming from the Manobo and the Blaan Indigenous Peoples Group of Region 12, we had great plans for the three-day event. We intentionally wore our respective traditional clothing and accessories to represent the Indigenous Peoples Groups we belong and share the cultural diversity of the Philippines. We were both very distinctive among the more than 2, 000 participants because of our traditional clothing. What we wore became a starting point for conversations and introductions with other training participants, as well as sharing our advocacy too,” Arjho said.

During the three-day event, Arjho shared about the advocacy of the KafyeBlaan Empowerment, Inc. and discussed the challenges of climate change encountered by the Indigenous Cultural Communities in the Philippines, specifically in SOCCSKSARGEN (Region 12), and its impact to our cultural preservation. 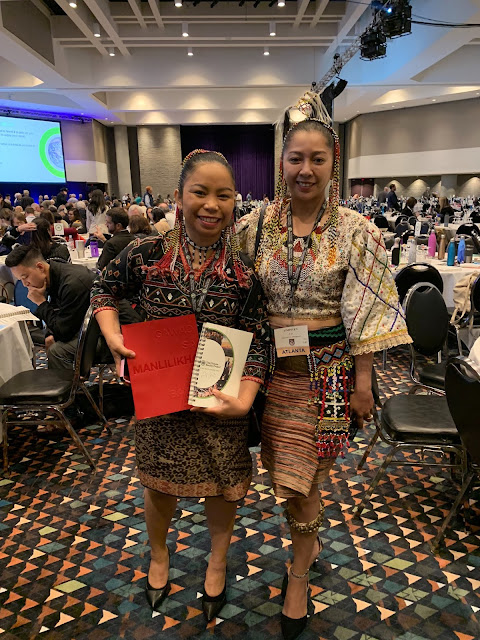 The role of Indigenous People

Arjho acknowledges the important role of Indigenous People (IP) on mitigating Climate Change. She is also aware that IPs is the most vulnerable to its adverse effect.

“IPs all over the world has traditional practices that are environmentally friendly,” said Arjho. “IPs are large users of renewable resources in their communities, long before the introduction of fossil fuel as sources of energy.”

The introduction of modern agricultural practices by multinational agricultural companies also led to the disruption of indigenous farming of the IPs.

“The multinational companies who introduced large mono-cropping systems have impacted the diversified farms of the IP communities. With the shift to these mono-cropping system and high input-based farming system, our endemic resources, such as the Blaan upland rice variety, have been vanished to accommodate cash crops agriculture,” Arjho said.

“These endemic resources are mostly the sources of raw materials for rituals, weaving practices, food resources, and traditional medicines. It is a big loss to the cultural integrity of the IPs. There are lots of traditions have lost and some are barely surviving because nothing is left in the community resources. As a result, it is impossible for such traditions to be practiced,” Arjho said.

Arjho shared about the Blaan Tabih she wore during the training to highlight the impact of Climate Change in Landan. “Before, I can still remember the wild abaca used by Fu Yabing for weaving. Now, since the supply of the abaca has become rare in the community, the abaca needs to be sourced out from other communities, even outside of the town, just to be able to weave the Tabih. This is just one of the impacts of shifting agriculture that contributed to the micro-climate change. In Landan before, as I was a child, there were no pineapple farms in sitio Amguo, in sito Kalyong, or in sitio Dam. The land was planted with corn, coconut, upland rice, vegetables, and different fruits. The locals had their supplies of vegetables since they planted it in their own backyard. Now it became pineapple plantations and the locals need to go to the town center just to buy vegetables,” Arjho recalled. 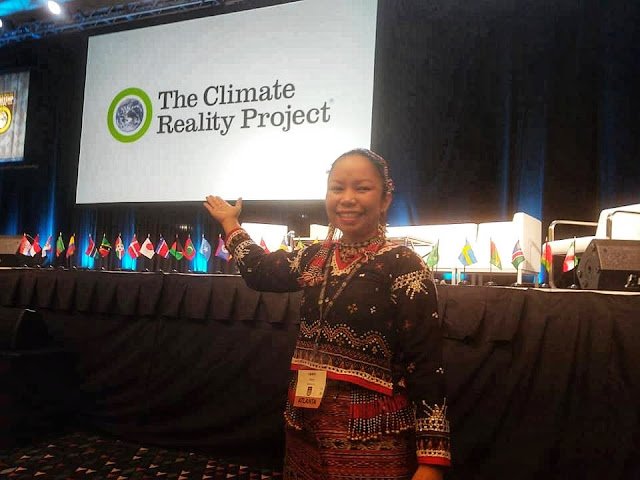 Arjho also highlights the importance of Indigenous Knowledge on Climate Change mitigation and adaptation initiatives. IPs have lots of sustainable practices that can help combat Climate Change. But it needs to be acknowledged and used in a practical manner.

“There should be a balance of everything,” said Arjho. “Indigenous Knowledge of our traditional old folks needs to be integrated as part of the learning process for the younger generations. To sustain our Indigenous Knowledge Systems and Practices (IKSP) means sustaining our limited resources, as well as in the IP communities where the knowledge, systems, and practices are largely dependent.”

“The IPs can really get back into the traditional mindset of caring the environment not because the government said so or because they are being paid. But because it is the moral responsibility of everyone in the community to protect the environment no matter what role you play as a member of that community. It is restoring traditional resources for food, medicine, and cultural practices,” Arjho said.

Arjho also highlights the role of the youth in climate change documentation and to help find sustainable solutions for it.

“The youth can also document the stories of their old folks – from what they had experienced back then and the difference in today’s environment. The youth can compare the past and present climate, like the occurrence of flash floods and droughts. These basic observations need to be documented as baseline information on the impact of climate change in the community,” Arjho said.

“Climate Change starts in the local perspective and solutions must be done local too,” she added. 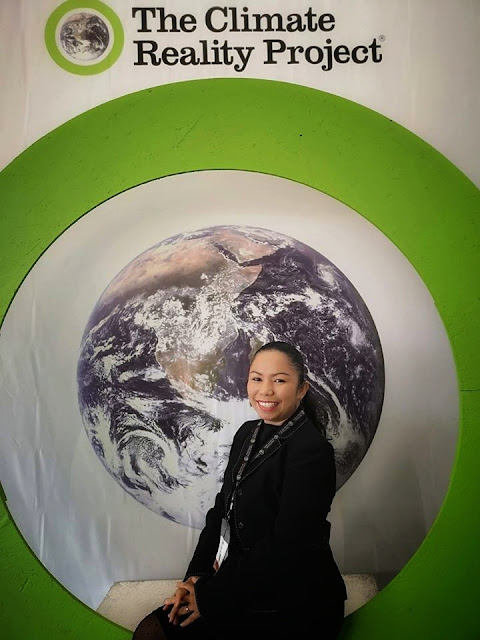 Arjho believes that everyone has a role to play in combatting climate change. “Each one of us can do something to heal this planet and that starts from recognizing that Climate Change is real,” Arjho said.

“Climate Change is largely a result of our man-made activities. We can also make some man-made decisions to help curve down the heating of our planet,” Arjho said.

She is excited to apply what she learned from the training. She wants to reach more audience and engage her community to act against Climate Change.

“As a trained Volunteer Climate Reality Project Leader, I have committed to share more awareness and environmental education on the issue of Climate Change using the presentation materials from the training. I have committed to reach and engage with my community,” Arjho pledged.