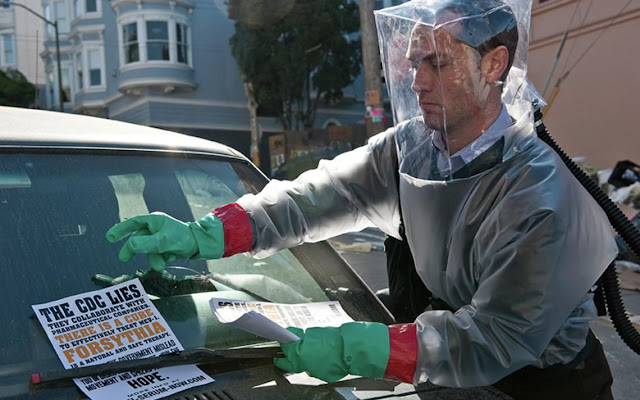 There is a resurgence of interest in pandemic-adjacent films when COVID-19 becomes a global health crisis. Films like Contagion (2011) by Steven Soderbergh, depicts a fictional pandemic called MEV-1, a zoonotic disease that spreads from animals to people in Hong Kong, and then kills tens of millions worldwide.

Contagion jumped from near obscurity in December 2019 to being one of the most requested films across various streaming networks, including iTunes and Amazon Prime. During its release nine years ago, it earned over $100 million and lauded by the scientific community for its accuracy in portraying infectious disease.

The film opens in a black screen with the sound of a coughing woman named Beth Emhoff (Gwyneth Paltrow). Then she appears on the screen with words "Day 2" and answers a call on her cellphone. She gives her credit card to a cashier to pay her bill. The cashier gets it, punches on the computer screen then swipes the credit card. She seems tad pale and sweaty just like the waiter in Kowloon, Hong Kong, the Ukrainian model in London, England, and the man in Tokyo, Japan. They all come from the casino in Hong Kong and die later on. Beth is the patient zero, as she acquires the virus from a chef who works in the casino, as it reveals at the end of the film with the words "Day 1."

Dr. Leonora Orantes (Marion Cotillard), an epidemiologist, was sent by the World Health Organization to Hong Kong to trace the origins of the MEV-1 pathogen. As she reviews the CCTV footage of the casino, she sees how Beth infects those individuals who have direct contact with her.

Contagion shows how basic human contact can hasten the spread of disease around the world. Dr. Erin Mears (Kate Winslet), the Epidemic Intelligence Officer, explains in front of a whiteboard in a drab government office that the average person touches their face 2,000 or 3,000 times a day. "That's three to five times every waking minute," Dr. Mears says. "In between, we're touching doorknobs, water fountains, elevator buttons, and each other." To stop the spread of the pathogen, Dr. Mears explains, officials need to determine its contagiousness, whether people without symptoms can infect others and who exactly is susceptible.

Dr. Mears conducts contact tracing as she interviews Mitch Emhoff (Matt Damon) and other persons who have direct contact with his wife. Unfortunately, as she conducts her investigation, she gets infected and dies without having the vaccine she needs.

Another notable thing about this film is how misinformation spread like the virus. Alan Krumwiede (Jude Law) is a conspiracy theory blogger who seeks to capitalize on misinformation by hawking a fake cure. He claims that the MEV-1 virus was manufactured by drug companies to turn a profit. He posted a video on his website, falsifying the symptoms of the virus and claiming that forsythia is the cure for the disease. His video shows his audience how to self-cure with forsythia.

This scene is more relevant now since misinformation or "fake news" is like a virus that becomes a pandemic in today's society. Alan's character can be compared to those online personalities who peddle various theories about the virus and make a profit out of it. He capitalizes on people's fear and successfully infected his 12 million followers. Contagion reminds us that the bad information on the internet mimics the spread of a very contagious virus, which could infect us all.

It is also interesting to see how deforestation disrupts the natural habitat of wild animals. Many studies confirmed that these animals are the carrier of zoonotic diseases like the Severe Acute Respiratory Syndrome (SARS), Avian Flu or H1N1, Ebola virus, and the recent novel coronavirus or COVID-19. In the last scene of the film, a bulldozer of a mining company destroys a portion of a forest where wild animals, like bats, inhabit the area. A bat carries a piece of banana then goes to a pig farm and drops its food, which is eaten by a pig. The pigs are sold to a buyer and supply it to the casino. A pig is slaughtered and prepared by a chef of the casino, who shakes hands with Beth, transferring the virus to her.

As the number of infected persons of COVID-19 continues to rise, the health officials around the world urge the public to stay at home and observe proper handwashing. As viewers, we would probably think that this film predicts the COVID-19 pandemic. But it is a cautionary film showing scenarios of social breakdown, looting grocery stores and pharmacies, believing in fake news, and people dying of the disease.

These scenarios shown in Contagion are also similar to other films like Outbreak, World War Z, and Pandemic, which they never fail to stir our fear on infectious diseases and remind us of how a virus can wipe the human race. It has goosebumps effect when you watch it again. But watching these films is not for everyone and could have a negative impact on anybody with health-related anxiety issues.

There will be more films like Contagion in the future. They act as a prompt that tells us how we fail to learn from previously unknown diseases and how society's indifferent response could worsen the situation.