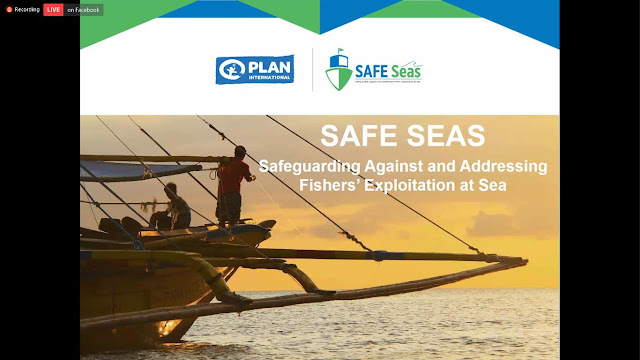 Plan International Philippines, through its Safeguarding Against and Addressing Fishers’ Exploitation at Sea (SAFE Seas) project, hosted an online media forum on November 18, 2020, to raise issues on forced labor and human trafficking on fishing vessels and explore potential areas for collaboration with the media.
The forum Role of the Media in Protecting Fishers from Forced Labor and Human Trafficking amidst a Pandemic was attended by media practitioners from SAFE Seas’ project sites, namely Puerto Princesa City and Taytay, Palawan, General Santos City, and Sarangani province. Seasoned correspondents Buena Bernal of Channel News Asia, Redempto Anda of Philippine Daily Inquirer, and Joseph Jubelag of Mindanao Bulletin shared experiences and tips in covering stories related to labor and human rights.
“Coming from an informal sector, fishers are very vulnerable to abuse and exploitation. While forced labor and trafficking in persons in the fishing industry already existed before the pandemic, COVID-19 is magnifying fishers’ vulnerabilities and making it easier for them to be exploited at sea. One way to address this is by empowering fishers, traders, operators, and other actors along the fisheries supply chain with the correct information that can potentially help change their practices towards having fair and acceptable working conditions for fishers,” says SAFE Seas Project Manager Joe Pres Gaudiano.
He added that through the help of the media, we can equip the public with the right knowledge to protect fishers, promote good labor practices, and prevent forced labor/trafficking in persons in the fishing industry.

Fishers among the most vulnerable

From a previous discussion with government agencies, the private sector, and civil society organizations on protecting fishers from human trafficking and COVID-19, it was agreed that fishers are among the most vulnerable to exploitation and abuse, especially during this pandemic.
Some of the factors that contribute to their vulnerability are lack of economic and social protection, lack of awareness on what forced labor/human trafficking looks like in the context of fishing, poor enforcement of laws that can potentially protect them and enforce labor rights in the fishing sector, and absence of appropriate reporting and referral mechanisms for cases of forced labor/human trafficking of fishers.
Case in point is the experience of 33 Filipino fishers, two of which are minors, from General Santos City who set sail in January aboard three tuna handline fishing vessels. They were apprehended by Indonesian maritime authorities due to alleged illegal entry to Indonesian waters. After spending two months in jail, their situation finally reached their families and was reported to the Apostleship of the Sea (AOS) program, an affiliate of SAFE Seas’ implementing partner Oblates of Notre Dame Hesed Foundation, Inc. (OND Hesed).
Through AOS’ and OND Hesed’s coordination with both the Philippine and Indonesian consulates, 27 fishers (including the two minors) were repatriated last July.
According to the fishers, they were obligated to work under rough conditions at sea. They had to exhaust all their means to catch fish to earn their share and compensate for the operational expenses incurred by boat owners. While they were detained, their wives back home were worried because they were only being fed twice a day and were exposed to health risks.
Based on the Department of Justice’s and the Department of Labor and Employment’s manual on the labor exploitation dimensions of trafficking in persons, forced labor is a form of human trafficking for labor exploitation. Some common indicators of forced labor in the context of fishing are:
In most cases, fishers do not realize that they are being trafficked or exploited. Since these abusive practices have been going on for decades, most fishers simply accept them as part of the job.

SAFE Seas and the role of media

To address the often overlooked issue of forced labor/trafficking in persons in the fishing industry, Plan International Philippines is implementing the SAFE Seas project for Palawan project sites and in partnership with OND Hesed Foundation, Inc. for General Santos City and Sarangani project sites. This project is being supported by the United States Department of Labor (USDOL).
SAFE Seas’ main objective is to combat forced labor/trafficking in persons on fishing vessels in Indonesia and the Philippines through improved enforcement of relevant laws and regulations, and decreased indicators of labor exploitation on fishing vessels. Plan International is working closely with various actors who deal with forced labor/human trafficking and the fishery industry. One of which is the media.
“Relevant discussion points from the forum can be escalated through partnerships with strategic influencers like the media,” adds Gaudiano. “We hope that the media will not only report cases of forced labor/trafficking in persons in the fishing industry but also help promote practices that empower fishers and encourage interventions to improve better relationships between fishers and operators/traders.”
###press release
Labels: fishing industry Human Rights news