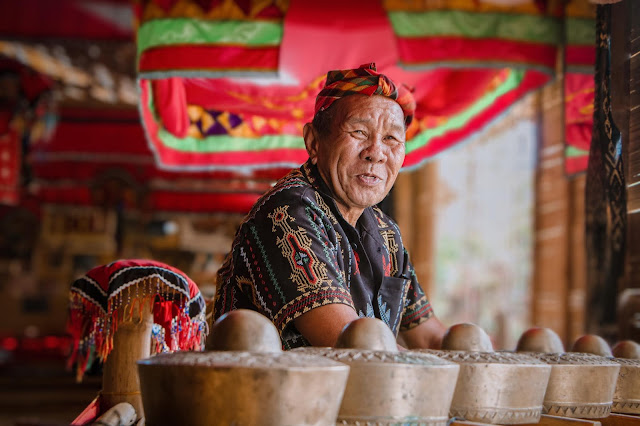 Blagon Gunog Antog, popularly known in the Tboli community as Mà Blagon, is a rare musical master for his tribe. He acquired his musical abilities as early as five years old. He learned to play Tboli instruments through observation and community immersions.
He plays different Tboli musical instruments such as heglung, kumbing, sludoy, tnonggong, tambol, smagi, blowon, and klintang. He played a significant role in the founding of the municipality of Tboli, as he represented the rich culture of the tribe through his music. Mà Blagon’s music not just entertains guests or appease a lonely Tboli. It also serves as a continuation and preservation of their culture.
Mà Blagon was born in Barangay Desawo where he naturally learned how to play klintang through observation and the guidance of his uncle. He became an informal teacher to the young Mà Blagon. When he was a kid, he did not have a klintang set of his own. He would frequent his uncle’s house to observe and practice. His uncle used to be a famous klintang master in their community.
“I have an uncle who owns a klintang. His name is Layag or Mà Finan. Whenever he had visitors in his house, I could not practice with him. What I did was I looked for cans of sardines as a substitute for it. I counted the pieces to match the number of gongs in a klintang. I also matched the sounds to resemble the sounds klingtang makes. When his visitors leave, that’s the only time I could practice. That’s how I started to play,” said Mà Blagon.
There are days he would fall asleep beside the instrument. Mà Blagon claims that most of his compositions are revealed through his dreams. When a composition comes to him in his sleep, he immediately practices it by the time he wakes up. He does this to avoid forgetting the melody. His interest was also cultivated with the support and the encouragement of his old folks back then.
“Dreaming is not enough. Playing it with the klintang instrument would completely reveal the sounds that were given to me through my dreams,” Mà Blagon said.
“I practiced klintang during the day and heglung at night. When people were about to sleep, I played kumbing so that they could easily fall asleep,” he added.
Mà Blagon has 50 original klintang compositions, such as Klintang Nadal, Soyow, Legdeg Kuda, Sendulog and Duyog which he played using heglung, sludoy, tnonggong, blowon, kumbing, and sloli.
In the early days of the town, Mà Blagon was invited to the Malacañan Palace, along with other Tboli leaders, to represent their tribe. There, he introduced their tribe through the music out of his klintang.
The local government unit of Tboli partners with him in community projects particularly in teaching the young generation of Tbolis on their cultural heritage. Now, he is recognized as one of the cultural masters actively sharing his musical knowledge to Tbolis and non-Tbolis alike. 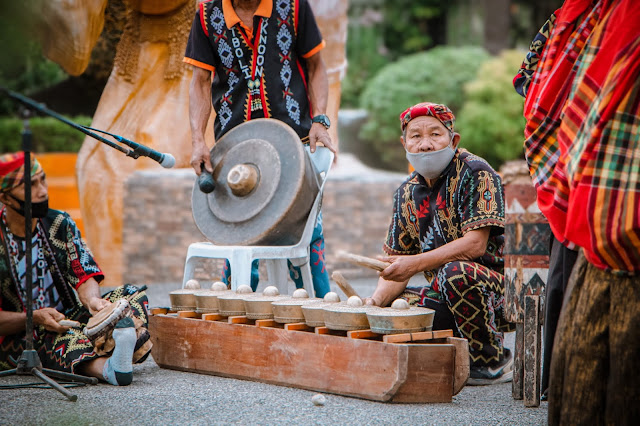 In 2003, he initiated a musical school project where he taught young Tboli children of Brgy. Lemsnolon 8 different musical instruments. This project even reached the neighboring barangays of Kematu and Desawo.
Through this initiative, he was able to produce 100 musical artists who are now actively performing not only in the municipality but also in other parts of Region 12.
“I told my students if they know how to play the Tboli instruments, they should share what they have learned from me. This is to help preserve the Tboli music or the culture. I want the young Tbolis to learn so that our culture and traditions would not be lost.”
Mà Blagon is also involved in cultural festivals in his town and in the province of South Cotabato. He serves as musical coach for the street dancing competition. He also contributed to the musical ensemble of the Tnalak music for the Tnalak Festival of the province.
In 2007, Mà Blagon was hired in the Tboli Tribal Affairs Unit as one of the cultural masters to teach young Tbolis about their culture and tradition. Under his mentorship, the Summer School of Traditional Arts was established. It aims to bring cultural awareness and appreciation to the young generation. He was able to reach 25 barangays and produced more than 300 musicians.
In 2014, the Summer School for Traditional Arts was renamed as Summer Sports, Music and Dance Clinic and Workshops. From 2014 to 2019, he was the instructor for traditional arts and music. He teaches klintang, heglung, sloli, and tnonggong to both Tbolis and interested non-Tbolis.
Mà Blagon was recognized as a cultural master in playing Tboli musical instruments on March 14, 2019, during the Indigenous Peoples’ Day celebration, as part of the municipality’s 45th Foundation Anniversary and 21st Seslong Festival.
On October 24, 2019, the Department of Science and Technology (DOST) Forest Products Research and Development Institute (FPRDI) recognized Mà Blagon for his traditional knowledge on bamboo-made musical instruments.
Koryo Mindanao Inc. also recognized his outstanding contribution and achievement in the field of indigenous music during their 3rd Summit held on February 21, 2020 in Koronadal City, South Cotabato.
Despite these recognitions, he remains committed to share his knowledge with the young generation.
“I encourage my students to share what they have learned from me so that our music will not be forgotten. I always tell them to teach their siblings and other people from different barangays in the Tboli town. Keep on learning, practicing and sharing,” Mà Blagon said.
______
Originally published in SunStar Davao
by Genory Vanz Alfasain (a.k.a. Yadu Karu)
Labels: culture Indigenous People interview news People story Tboli