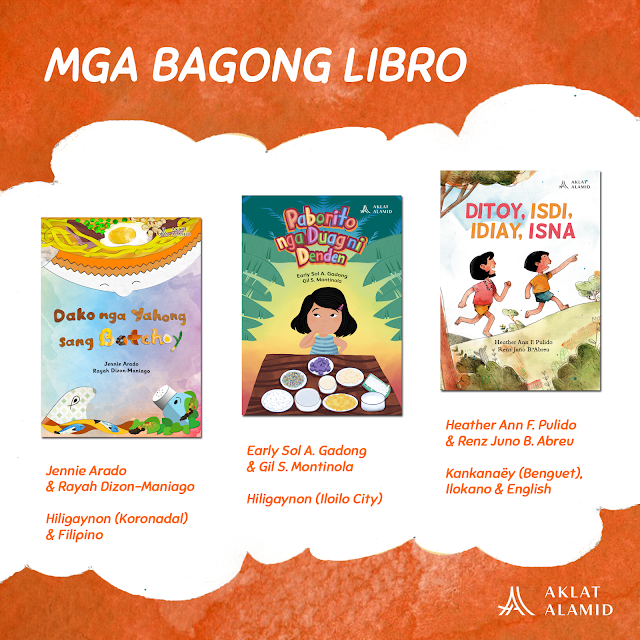 In celebration of the National Children's Book Month, Aklat Alamid will introduce three new children's books from different parts of the country. The virtual launching will be on July 30, 2021, 6-8 p.m., via Zoom and Facebook Live.
“These new books are a product of years of collaboration with the writers, illustrators, translators, language consultants, target readers, and communities where the books belong to. We started the development of these books before the pandemic and, in our best capacity, pushed through the production process despite the limitations brought about by the pandemic that started more than a year ago,” said China Patria De Vera, the senior editor of Aklat Alamid.
“We needed to remind ourselves in Aklat Alamid of our thrust -- that children from the regions, not just those from the capital, need to have access to books written specifically for them. Hence, we see these three new books as our small contribution to realizing that thrust.”
These three books are Dako nga Yahong sang Batchoy (Big Bowl of Batchoy) written by Jennie Arado and illustrated by Rayah Dizon-Maniago (Mindanao); Ang Paborito nga Duag ni Denden (The Favorite Color of Denden) written by Early Sol A. Gadong and illustrated by Gil S. Montinola (Visayas); and Ditoy, Isdi, Idiay, Isna (Here, There, There, Here) by Heather Ann F. Pulido and illustrated by Renz Juno B. Abreu (Luzon).
Jennie Arado’s Dako nga Yahong sang Batchoy was the winner of the 2018 South Cotabato Children’s Story Writing Workshop. The story is written in Hiligaynon and Filipino. The book talks about Leon who does not have an appetite to eat. That is why his parents brought him to batchoyan to teach the kid the Batchoy Magic. Jennie is from Koronadal City and now works in Davao City while Rayah is an illustrator from General Santos City.
Early Sol Gadong’s Paborito nga Duag ni Denden initially came out as a zine during the Iloilo Zine Fest in 2018. It talks about Denden's discovery of her favorite color and her cooking of a special snack. Sol is a teacher and writer from Iloilo City. Gil is an illustrator, teacher and writer from Mina, Iloilo Province.
Heather Ann Pulido’s Ditoy, Isdi, Idiay, Isna is a picture dictionary in Kankanaëy and Ilokano languages. The picture dictionary features the play activity of Ambot and Ambit. Heather is a writer based in Baguio City and Juno is from Pangasinan.
“We value collective effort in our book development process — from production to promotion and distribution. As an independent publishing house that focuses on publishing children’s books written in regional languages, working with people who are also engaged in contributing to their own respective communities allows us to do what we do as a small initiative,” she said.
“Producing these books is also our small way of decentralizing the production of children’s books and children’s content, in general. We want to hear the stories from the regions, created by the people who belong or are rooted in their own region and by artists who are also in tune with our thrust as an independent publishing house, whether they are newbies or seasoned in creating content for children. We hope that these books will be of use to the communities and that these can reach the intended child readers.”
Aklat Alamid is an independent publishing house that aims to create books for Filipino kids in the different Philippine languages. It collaborates with individuals, organizations, and agencies, as well as other groups to conduct activities that help nurture the children’s literature in the regions. (### Genory Vanz Alfasain/SunStar Davao)
Labels: Books literature news story