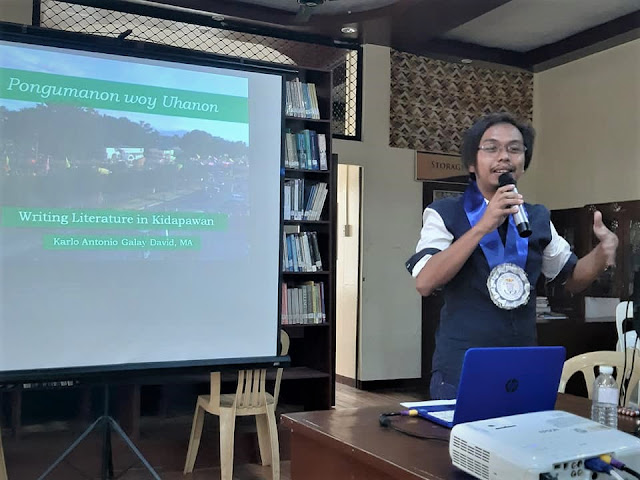 ALABEL, Sarangani (MindaNews / 26 May) – For Karlo Antonio Galay David, there is no such thing as a monolithic Mindanao literature. He considered Mindanao as one of the most culturally diverse islands in the world, and its creative expressions – including literature – are equally diverse.
David is a fourth generation Kidapawanon, or from Kidapawan City, the capital of Cotabato province. Currently, he divides his time between his hometown and Davao City. He writes fiction, drama, translations in English and Cebuano, and the variety of Filipino in Davao. He won some literary awards, including the Nick Joaquin Literary Award for fiction and a Don Carlos Palanca Memorial Award for one act play in English. Despite these recognitions, he is still ambivalent about calling himself a writer.
He advocates for Mindanao settler literature because he believes that Mindanao’s literatures should be recognized for the diverse body of texts – written from an equally diverse array of ethnolinguistic and cultural perspectives.
“That means literature written by Mindanao settler writers should be read as such, and not as representations of and expressions from the perspective of the Lumad (indigenous peoples) and the Moro people (which they often depict),” David said.
According to him, the identities that produce these Mindanao literatures can be categorized in many ways from various perspectives – whether it be by locale, language or religion.
In his controversial pamphlet Ang Dapat Mabatid ng mga Colono (What the Settlers Must Know: Settling Issues on Mindanao Settler Identity, David lengthily discussed Mindanao settlers and what makes them distinct. He mentioned that the settlers are natives of Mindanao who descended from historical colonial immigrants.
As he defined it, Mindanao settlers are those who were born in Mindanao who have migrant or immigrant great grandparents from Luzon and Visayas.
The pamphlet discussed about the three main groups in Mindanao – the Moros, Lumads and the settlers. These groupings are defined primarily by rough spheres of power and cultural commonality: the Moros are those whose cultures are strongly influenced by Islam (to which they have converted); the Lumads are those who remain free of Islam and who still practice at least some part of their precolonial culture. The settlers, on the other hand, are those who live life under the influence of the Christianized colonial Philippine nation-state. “There are many valid objections to the tri-people paradigm, but it would be naïve to ignore the divisions it calls to attention, and counterproductive not to take advantage of the insights it offers,” he added.
“Settlers are not immigrants, and we are certainly not migrants. Where would we immigrate or migrate from? My great-grandfather immigrated to Mindanao before World War II from Pampanga, but I have never even been there — I, my parents and grandparents were born here. Am I supposed to be a Pampanga immigrant?” David said in a speech delivered as an introductory talk in Pagguho (Decline/Emergence): Literature and the Pandemic, an online literary conference.
“The literature of Mindanao settlers is both a large body of old works to respond to, and a rich world of possibilities waiting for new works to take it forward. Many settlers have written and continue to write badly and dangerously, but rather than censoring them, I believe the solution to that is to write back, and write better,” David said.
“It is time, I believe, for Mindanao settler writers to discourse themselves, write for and to each other. It is time they realize that they are writing their own literature,” he added. 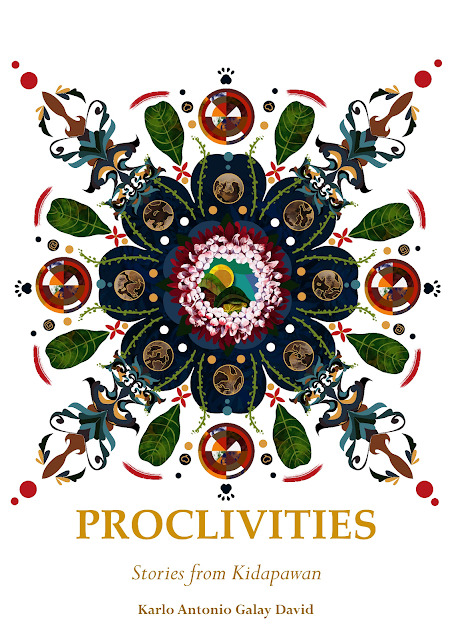 David has a recent book called Proclivities: Stories from Kidapawan. He said that this collection and its stories openly acknowledge and embrace the fact that they are written from the Mindanao settler’s perspective and dealing with Mindanao settler concerns.
“This book emerged as a series of its own over a period of nine years. I began noticing that some of the stories I was writing were showing similarities in concern and style, so I started curating them into this series,” he said.
“To some extent this was inevitable: I grew up in Kidapawan and Davao being treated as something of a weirdo, so it was really only a matter of time before I started producing works that focus on that, on eccentricities, on the rituals which are born of trauma and which in turn shape those who do them.”
Language also plays an important role for David’s short stories. He uses local language specific to its setting which sticks to its local linguistic realities from whence they emerge.
“In some, like ‘Familiaris’ and ‘The Summoner of Sorrows,’ I leave entire multilingual dialogue untranslated, while in another story, ‘Kuyaw,’ the entire thing is in Davao Tagalog. Ideas and their subtle nuances are bound by language, and you can only really translate words to a certain extent – ‘brayt’ has a different connotation to ‘smart,’ just as saying ‘agay’ expresses a different kind of pain as would saying ‘ouch’ and ‘aray.’ And some words are outright untranslatable – ‘lain,’ ‘kuyaw,’ ‘hilas’ among many others.”
“Just by using stuff in ‘Walang nagabili ng stuff ko dito’ implies that the speaker belongs to a certain socioeconomic background that would be lost in translation. I let these highly localized nuances – the idiosyncrasies of community really – come out in my stories,” he said.
“This makes them part of my effort to write a Literature of the Specific, works that eschew ‘universality’ and try to be as particular and idiosyncratic as possible,” he added.

David encouraged local writers to explore their locale. His call has always been to not limit themselves to writing-as-depiction, but writing-as-articulation.
“You do not just show your place and its people as exotica in your stories, you have to be part of that place and people, understand its realities and concerns, and not only reflect that in your art but make your art as conversation about those realities and concerns. Local stories aren’t just about locales, they are written as and for locales,” he said.
This is also to help avoid misrepresentation, which according to him, “in all its layers – can serve to hijack local perspectives and promote distorted perceptions of a locale in wider audiences.”
David openly discloses in the collection that his stories are settler stories, and therefore should only be read as such.
“In the whole collection, I think the titular story, ‘Proclivities,’ does this most –uprootedness, but also the burden of those whose responsibility is to be irrelevant, the need both to forget and remember, the need to resist the gravity of being inhuman – these are concerns I feel people in Kidapawan need to think about more, and far more than writing about Kidapawan in that story, I was writing for and to Kidapawan and its people,” David said. (Genory Vanz Alfasain / MindaNews contributor)
(Genory Vanz Alfasain is an advocacy blogger, writer and visual storyteller from Sarangani Province.)
___
~Originally published on Mindanews
Labels: interview literature Mindanao SOX Writers writing