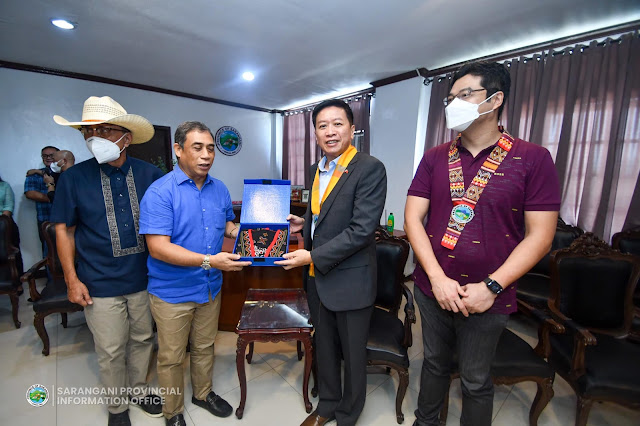 ALABEL, Sarangani (August 13, 2022) – In line with the growing ties between China and the Philippines in creating boundless economic opportunities through foreign linkages, Consul General Li Lin of the People’s Republic of China paid a visit to Sarangani on August 12.
With him were Consuls Jin Jun and Chao Jianwei, representatives of Panhua Integrated Steel, Inc. (PISI) led by its Project Director Mr. Xiao Guiyang, and other Chinese businessmen from various industries.
The visit forms a part of Governor Rogelio "Ruel" D. Pacquiao’s administration's plan to establish initiatives to build stronger partnerships with the foreign consulates to promote Sarangani as a favorable investment destination.
During the arrival of the Consul General and his party, the provincial officials and employees, led by Vice Governor Elmer De Peralta and Provincial Administrator Atty. Ryan Ramos, gave a warm welcome through a cultural presentation and community dance at the Capitol lobby.
The team had an opportunity to converse with some Sangguniang Panlalawigan members. The talk centered on the province’s potential to be a prime investment hub in Mindanao.
The team toured the Sarangani Provincial Hospital (SPH), where they checked on the facilities and equipment. They tackled the things that can be added to better its services. 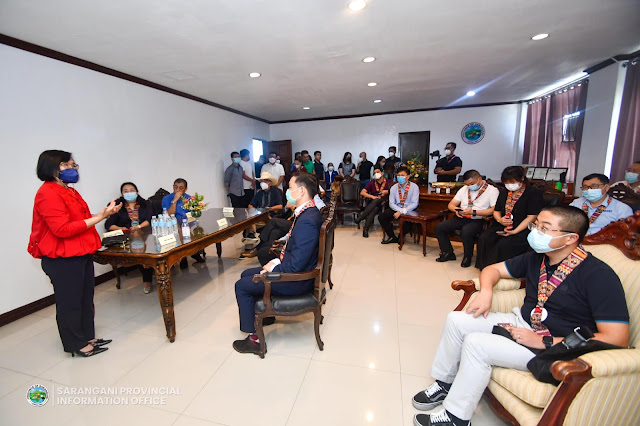 The team went straight to the SOCCSKSARGEN Drug Abuse Treatment and Rehabilitation Center in Kawas, Alabel. The facility was completed in December 2018 through a P350-million grant from the Chinese government. It was implemented by China Aid through the state-owned China State Construction Engineering Corporation.
The team also visited the Pacman Village in Alabel, where they had a walkthrough in the area and checked on the village’s situation.
To further improve the living conditions of the community, PISI Project Manager Mr. Xiao Guiyang pledged to donate air-conditioning units to be used in the village’s multipurpose building.
The team’s last stop was in PISI in Maasim, where Consul General Lin expressed his gratitude to Sarangani for the warm welcome.
He also congratulated the province for being the smart choice as a location for big investments.
"Sarangani is a wise location for business ventures because it is strategically located to resources, markets, and is a very dynamic area for trade and investment," Lin said.
He also disclosed that the PISI can be one of the province’s prime economic sources once operational as it can generate up to $3.5-billion worth of investment.
In his address, Lin eyed the continued growth of a comprehensive, strategic, cooperative relationship between China and the Philippines.
He sees the strong partnership with Mindanao as an avenue to establish people-to-people and cultural exchange, which can attract more investors, especially in Sarangani. (Joshua John S. Pantonial & photos by Jake T. Narte and Martin Fernando E. Bernad Jr. /SARANGANI PROVINCIAL INFORMATION OFFICE)
###
Labels: news Sarangani